Admiral Sir Cloudesley Shovell – But Only If You Liked Upbeat Sabbath 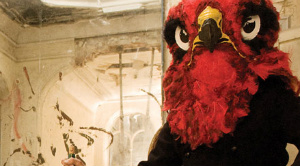 If you liked the distortion heavy and upbeat version of Black Sabbath, you’re going to want to check out Admiral Sir Cloudesley. Their latest single, “iDeath” (gotta fucking love the Apple reference there), is totally and completely in the vein of ‘60- and ‘70s-era jamming. It’s blues-based with lots of distortion – and it’s a lot of fun.

Check out the jam, and the press release, which gives details about the band and their upcoming album, below.

The closest I can get to describing hearing Admiral Sir Cloudesley Shovell’s music for the first time is that it was akin to the aural equivalent of stumbling into an 18-year-old male’s bedsit in 1973.

Status Quo, Budgie and Black Sabbath albums are piled on top of the hi-fi; torn centrefolds from Playbirds and Whitehouse are Sellotaped to the walls; Richard Allen’s Suedehead, William Burroughs’ Junkie and Francis King’s Sexuality, Magic & Perversion tumble from the window sill; crushed Courage Light Ale cans and Players No 6 packets form a tower in the corner; filthy, tight-fitting T-shirts and patched-up denim bell bottoms are strewn all over the floor. And there, in the centre, like a Biblical king surveying his domain, is the music lover – a stick-thin, back street Jesus, engrossed in the rolling of his last spliff, flowing hair all but obscuring his chops, the opening bars of The Groundhogs’ ‘Cherry Red’ blowing from the speakers around him like a sucker-punch from Heaven.

Get the picture? Good. The Shovell, as their friends and fans know them, belong spiritually to a time and place we’d all like to believe still exists somewhere – maybe that’s why their no-nonsense take on the progressive metal sound of the early-mid ’70s is so damn accessible. You don’t need a degree in doom-rock or a Masters in metal for their incorrigible clatter to strike a (power) chord – you just need ears, feet and some appreciation of what makes bands and music GOOD.

Some statistics: the Shovell are named after a 17th century English naval commander; Bill Darlington plays drums and is too thin, Louis Comfort-Wiggett plays bass without his glasses falling off and Johnny Gorilla plays guitar and shouts, both loudly; they have been together as a band since 2008 and mates for donkey’s years; their lineage includes more neo-psych, garage, freakbeat and powerpop combos than you could shake a stick at; there are people in Catalunya, Spain still recovering from the Shovell’s May 2009 tour there; their 2011 Rise Above 7″, ‘Return To Zero’/’Day After Day’, sold out instantly and now commands up to £100 a copy; their debut long-player will tear your face off and put it back on inside out, using spit.

OK, so that last bit may be open to conjecture but make no mistake – Don’t Hear It… Fear It! finds the Hastings threesome delivering the kind of greasy hard-rock thrills rarely heard in this climate of blind nostalgia and misjudged authenticity. It’s hard ‘n’ heavy, without the marshmallow; it’s old-fashioned yet so NOW that it hurts; it has three songs on side one and four on side two; it has yer actual Tony McPhee off of the aforementioned Groundhogs on it – it’s a rock ‘n’ roll album made by people who give two shits and who’ve earned just a little “me” time in the company of your ears. OK?