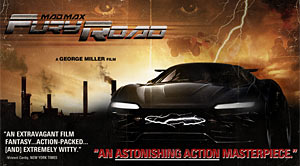 It’s been a twenty-seven year gap since the last Mad Max movie. Remember, the one most of us disliked, and pretty much left the series in ruins because of one pop-star singer turned actress, Tina Turner. Let’s just say not everyone can pull off talent on both sides like Mark Wahlberg, or even Justin Timberlake who actually carried through good performance in the sci-fi/thriller, In Time.

Fans of the post-apocalyptic road warrior have been patiently waiting, and are anxious to re-experience what the first entry did in the 1979 ozploitation classic, Mad Max.

Now George Miller is back without Mel Gibson for the first time in history with Mad Max: Fury Road starring Tom Hardy as Max Rockatansky, and Charlize Theron as Furiosa.

Early set photos have been released from George Miller’s Mad Max: Fury Road that is shot back to back with the sequel, Mad Max: Furiosa. The photos taken in Africa feature Abbey Lee Kershaw, prove that the filming began last month is well underway, and that we will have more to look forward to in the near future. Teresa Palmer was originally cast but due to delays of the production, she dropped out and was replaced by Abbey Lee (IMDB).