UFC 146: The Heavyweights – Biggest Fight Night Of All Time 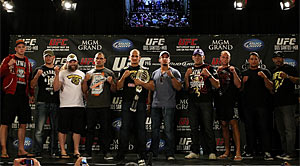 Literally the biggest fight card of all time will detonate at the MGM Grand Garden in Las Vegas on Saturday night as the Ultimate Fighting Championship organization presents UFC 146: THE HEAVYWEIGHTS on Pay-Per-View.

The first ever all-heavyweight main card is headlined by UFC heavyweight champion Junior dos Santos making his first title defense against the most successful heavyweight of all time, two-time champion Frank Mir. This titanic main event is supported by four other heavyweight collisions and, in total, 10 of division’s elite – and over 2400lbs of fighter – will be throwing leather in Las Vegas on Saturday.

“Fans have been going nuts for this all-heavyweight card. You’ve got 10 of the baddest men on the entire planet all going at it, including Junior dos Santos looking for some revenge against the man who just broke his mentor’s arm in Frank Mir. There’s going to be over 2400lbs of heavyweight on the main card – something we’ve never done in the history of the UFC. I’m looking forward to some brutal knockouts and some great submissions on Saturday night.”

“The excitement for this event is kind of crazy. We just did the press conference at the MGM Grand and the fans were there cheering and screaming. I am so excited to defend my belt on such a huge show.”

“I’ve been in the UFC for longer than almost everybody; I’ve seen some great fights and have fought on some great cards. This is the biggest fight of my career. Everyone loves heavyweights, and you’ve got 10 of the baddest men on the planet all in action. Junior is a dangerous boxer, but when this hits the ground, he’s done.”