PRODUCT OF HATE Releases New Single, “Revolution of Destruction” – First In A Series For 2012 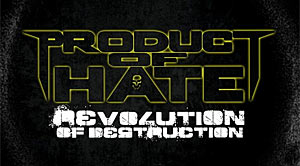 Wisconsin’s PRODUCT OF HATE continues to solidify their place as one of America’s true independent metal forces with the release of their new single, “Revolution of Destruction” – available today on iTunes, Amazon, and other digital retailers Worldwide.

Their first new music in over two years, “Revolution” presents the next evolution of the band as the first in a series of new singles for 2012. Stepping away from the traditional distribution model of an album or EP, PRODUCT OF HATE is embracing the “single” format, much as was done nearly fifty years ago, when an artist would hit the studio to immediately record a new track, then see it released mere weeks later.

“I’ve always been of the mindset that I was born too late. Elvis, Johnny Cash, Jerry Lee Lewis – these guys would hit the studio, record a song, and it was practically released and on the radio later that night. That’s how rock and roll got started, and it’s also pretty damn metal,” comments lead guitarist Geno Rathbone on the new release plan.

For “Revolution of Destruction,” the band reconvened with Chris Wisco at Belle City Sound in Racine Wisconsin, the recording location of the bands 2010 release, THE UNHOLY MANIPULATOR EP. Recorded, mixed, and mastered by Wisco (whose previous credits include albums for DIRGE WITHIN, NONPOINT, and LAZARUS A.D., among others), the track was produced by the band themselves. PRODUCT OF HATE will be joining Wisco in the studio once again this week to record another new song, “A Well-Deserved Death,” which is expected to hit retail in late June.

PRODUCT OF HATE first made headlines last year when they shot their ambitious and yet-to-be-released, UNHOLY MANIPULATOR short film (starring HELLRAISER actress Ashley Laurence), and again earlier this year when a performance video shot at the same time, “Blood Coated Concrete,” hit the web. Since February, the band has been exploring suitable label partners, while writing new material for a future full-length release.