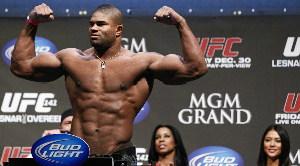 The title card at UFC 146 has been changed and Frank Mir will replace Alistair Overeem against Junior dos Santos in the main event on May 26, 2012, at the MGM Grand Garden Arena in Las Vegas. Mir was to face Cain Velasquez, the latter of whom will get a new opponent, though who it will be hasn’t been announced yet.

Overeem has a hearing with the Nevada State Athletic Commission on April 24th to review his request for license after failing a drug test earlier this month, so it’s unclear why White has made this announcement prior to a verdict.

What do you think of the change? Who should fight Cain? Post a comment below to let us know.