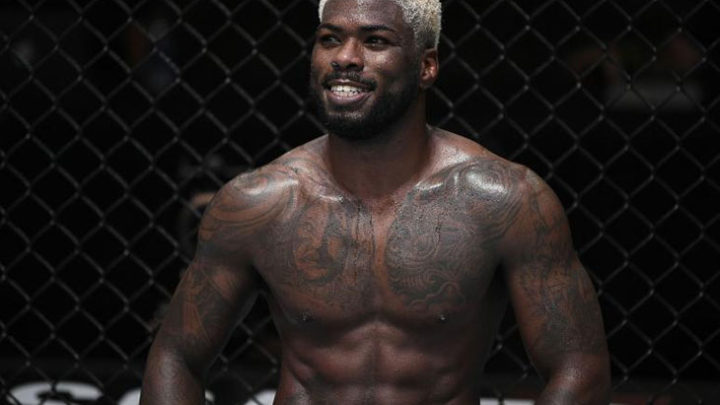 Trevin Jones’s UFC on ESPN 15 debut victory has been overturned following a positive marijuana test, per mmafigting.com. The MMA bantamweight orchestrated a sensational comeback to beat Timur Valiev on August 22 but his impressive win will, unfortunately, be wiped off the record books.

Jones was stripped of the victory after the Nevada Athletic Commission voted to overturn the fight’s result to a no-contest after the 30-year-old was found to have used marijuana. He was also hit with a 4.5-month suspension and a fine of $1,945.36; he will be required to submit three clean drug tests at various intervals before he is issued a new fighting license.

Jones accepted his fight on two days’ notice and was met with a barrage of punches at the UFC Apex in the first round of the contest, but he came back strong in the second round to land a right hook that ended Valiev then and there.

There will be plenty of MMA action this coming weekend, with UFC Fight Night set for Saturday. Of course, bettors will get the opportunity to rake in some cash and, if you’re looking to get your first betting spell off the ground, be sure to take advantage of free bets from the bookmakers.

Most of the biggest bookies offer free bets to new customers and, if you grab what’s presented, stakes are covered by free bet tokens. Tokens are usually non-withdrawable and are unlikely to be included in winnings, however.

Saturday night’s action will see Mads Burnell go up against Darko Banovic, with the fighters 2/13 and 19/4 respectively. Michael Page is 2/5 for a win over the 3/1 Ross Houston while Emmanuel Dawa heads into his fight with the 1/2 Oliver Enkamp as the 37/19 underdog.

Marlon Moraes and Cory Sandhagen will feature on the main card in a bantamweight fight; Moraes is 6/5 with the bookies and Sandhagen’s name has been attached to odds of 13/17. In featherweight competition, 2/5 favorite Edson Barboza will go head-to-head with Makwan Amirkhani, who’s at 9/4.

The heavyweight main event will showcase Ben Rothwell and Marcin Tybura. Bettors can get 4/6 odds on Rothwell and 6/4 odds on Tybura.

Jones is only one of the latest fighters to incur punishment for marijuana use. Jamahal Hill, Tim Elliott and Luis Pena were all penalized last month and, although Eliott and Pena took fights on short notice and informed the commission they’d stop using as soon as they were presented the fights, the amounts left in their system exceeded the 150 ng/ml allowable threshold.

Commission meetings have seen commissioners express concerns over the difficulty of fining and suspending fighters for a substance that is legal in the state of Nevada but they’re yet to amend laws pertaining to marijuana use despite the medicinal benefits and the fact that it’s now widely recognized as not being harmful.

There’s also been concern over athletes being forced to take more dangerous substances, with opioids, Xanax and Ambien all allowed.