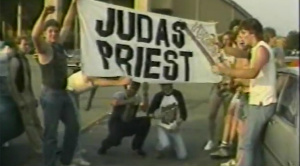 This is relatively old news, but I came across it lately and have shared the link with a number of friends that I thought would enjoy it – and none of them have heard of it, much less seen it. So, I wanted to share it with the Yellers out there.

Heavy Metal Parking Lot is a found-footage “documentary” that captures the essence of what it meant to be a metalhead in the mid-’80s. Filmed by John Heyn and Jeff Krulik in a Landover parking lot prior to a 1986 Judas Priest/Dokken concert, Heavy Metal Parking Lot has big hair, girls in tight jeans, guys in cut-off T-shirts, 20 year olds dating 13 year olds, stoned redheads, Firebirds, ghetto blasters, lots of beer, unseen pot, feathered hair, swearing, and much more to educate you on the metal scene of days gone by. Contrary to those (cough, cough, Tipper Gore, cough, cough) who would have you believe otherwise, Heavy Metal Parking Lot is evidence that the heshers back in the day were much more about good spirits and fun than demonic spirits and suicide.

A rumored favorite on the Nirvana tour bus, the film celebrated its 25th anniversary last year as it was screened at the Found Footage Festival. And don’t think this thing has gone unnoticed; Roger Ebert commented on the film’s subjects, referring to them as “stoned worshippers at the shrine of their own bewilderment.” Even Sophia Coppola called the filmmakers at one point to request permission to show it on Comedy Central. As much fun as they’re having, these kids look utterly stupid. It’s like watching a lost Beavis and Butt-head society come to life, and it’s fucking great. It was certainly a different time. Less (at least different) worries, more lenient laws, and maybe a bit more fun. I’d venture to say that there was more community among the heshers in the ’80s, but I’m a strong proponent for the sense of solidarity and kinship among even today’s metal crowd.

If you haven’t seen Heavy Metal Parking Lot, do so. You owe it to yourself.