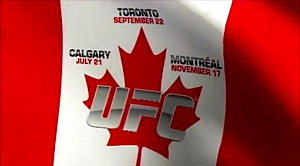 Calgary, Toronto and Montreal to Each Host Pay-Per-View Events this Year while UFC® Commits to Three Annual Global Events in Canada for Next Three Years

The Ultimate Fighting Championship returns to Canada with an unprecedented three events in 2012 as Calgary, Toronto and Montreal will each host Pay-Per-View events. The UFC will make its first-ever trip to Calgary, Alberta as it visits the Scotiabank Saddledome for UFC 149 on Saturday, July 21. Toronto will then host its third-ever event on Saturday, September 22 (venue to be confirmed) while Montreal will see a return to UFC action on Saturday, November 17 at the Bell Centre.

Additionally, the UFC announced a further commitment to Canada with three global annual events taking place through to the year 2014. Montreal and Toronto’s events will become mainstays through that period.

“Canadians have shown time and again how much they love the UFC,” said UFC President Dana White. “Their events have set global records since we first visited in 2008 and four years later, we’re proud to be bringing Canada three action-packed UFC events each year for the next three years.”

“It’s been our vision to host three annual premier events as our fans have proved they have an appetite for that and even more,” said UFC® Director of Canadian Operations Tom Wright. “From coast to coast to coast, we’ve been fortunate to have such loyal MMA fans, and business and government partners. We can’t wait to show Calgary and the rest of Canada what the UFC is all about – something our fans in Toronto and Montreal have experienced and continuously want more of.”

More information about the three Canadian dates in 2012, including main event matchups, undercard bouts and ticket sale dates and prices, will be announced at a later date.

Since 2008, the UFC has hosted eight events in Canada with each experiencing tremendous success. Collectively, the eight events have seen more than 185,000 fans in attendance and millions worldwide watching on Pay-Per-View. The three host cities to date – Montreal, Vancouver and Toronto – have had a cumulative gross gate of more than $40M and millions more in economic impact. Montreal has held four events (UFC 83, 97, 113 and 124) while Toronto (UFC 129 and 140) and Vancouver (UFC 115 and 131) have each played host twice.

Home to UFC welterweight champion Georges St-Pierre, the city of Montreal has set several previous records including fastest sellout, largest gate and attendance. UFC® 124: ST-PIERRE VS. KOSCHECK on Dec. 10, 2010 had set the attendance record at 23,152 before Toronto hosted its first-ever event on April 30, 2011 with UFC® 129: ST-PIERRE VS. SHIELDS at Rogers Centre, which obliterated almost every UFC® record including attendance (55,724) and gate ($12.075M).

For more information or current fight news, visit ufc.com. All bouts live and subject to change.