Bellator vs. UFC: Why Bellator Beats “The Ultimate Fighter Live” 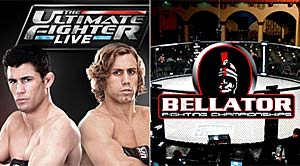 The Ultimate Fighter vs. Bellator

Sometimes the best way to get a little attention is to cause an argument. As a fan of Bellator Fighting Championships, I had a very positive reaction when it was announced months ago that they would be switching to Friday nights. The general consensus, however, seemed to be that Bellator would still run into stiff competition from “The Ultimate Fighter Live”, which recently debuted on FX and is also being aired on Friday. Now that both “season openers” have aired, Bellator FC has emerged as the obvious choice. Here’s five reasons why you should go watch Bellator and save TUF Live for the Tivo.

No.5 Preliminary fights before and even after the event.

Maybe it’s a bit of a bizarre concept to have “post-event” prelims, but they’re still live MMA fights available for the low, low cost of free. All you need is an internet connection and you can watch at least four additional fights from Bellator. The question is simple: which is better, an entire episode of build-up for one live fight, or at least eight live fights spread across Spike.com and MTV2? The answer is simpler: go watch Bellator. One of the goals of the UFC is to introduce you to an ever-revolving cast of characters that hopefully you end up caring about for a prolonged period of time. It’s a noble goal, and it’s led to the creation of some amazing stars. But Bellator simply has much more going for it. While it’s interesting and fun to get to know someone you’ve never met through his actions on television, ask yourself this: as an MMA fan, shouldn’t the fights take top priority? Not only do you get more fights with Bellator, you get bigger fights featuring a lot of top-ranked (both in Bellator and in the world) stars. And they almost always produce unforgettable highlight-reel moments.

No.3 “The Ultimate Fighter” is still very much a reality TV show with “reality TV drama”. The drama in Bellator is as real as it gets.

This point could be argued until you realize that several notorious “TUF bad boys” have both indirectly and directly stated in interviews that they were playing a role and just did the “bad boy” gimmick so people could notice them. On “The Ultimate Fighter”, you get your fifteen seconds of fame by being a drunken loudmouth that everybody absolutely loathes. In Bellator, you get your fifteen seconds of fame by catching people in Inverted Triangles or knocking people into next week. Once again the choice is obvious: go watch Bellator.

No.2 Live fights mean better fights? Maybe for Bellator, not for TUF Live. This is numbered so high for one reason: the UFC did everything in its power to ensure that the “TUF Live” debut would be full of action… and I still saw several boring fights. You couldn’t ask for a better formula (one five-minute round fought live) and it still couldn’t motivate some fighters to fight for a finish. In general, the fight quality of any “Ultimate Fighter” season can be all kinds of hit-and-miss, and the debut episode proved that not even the live concept can guarantee the fights will always be exciting. Of course, there’s always next week. But even if you take that viewpoint, you’re still saying “maybe next week” for one fight while Bellator is broadcasting an entire night of live fights.

No.1 It’s been fifteen seasons and, compared to Bellator, nothing has changed.

Even on a new network and with a live concept anchoring the show… TUF still felt very much like TUF. Is that a good thing? Maybe not after fifteen straight seasons. The term “stale” has been used to describe the TUF format for several seasons now. Meanwhile, Bellator FC continues to see champions rise and fall while world-class competitors fight in Bellator tournaments for their shot at the gold. Who knows what the next Bellator tournament will bring? I’ve seen TUF for so long that I know what to expect, and even if it’s on a different network, it’s still TUF. Bellator, meanwhile, continues to surprise me on a per-event basis. A little stability is nice, but unpredictability is what got me into MMA.

If you’re a Twitter user and want to get in on the discussion and/or offer up your own insight, feel free to use #gowatchbellator in your tweets to help spread the word.