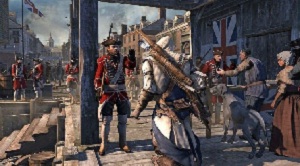 Here’s the top gaming news for the week of February 27th, 2012, brought to you by Yell! Magazine

After a bunch of leaked shots of the upcoming Assassin’s Creed III surfaced online, Ubisoft officially released screenshots, and the box art for the next title in the series. This confirms the new American Revolution setting and the new Native American protagonist. Ubisoft plans to make a more formal announcement on March 5th. Assassin’s Creed III is slated to be released on October 30th.

In interesting preorder news. If you preorder Sniper Elite V2, you get access to what they are calling “The Ultimate Mission.” In this “what-if” scenario, you get the opportunity to assassinate the Führer himself. This is just an extra mission, and has no effect on the main campaign, but it does sound like a fun extra. Sniper Elite V2 will be released this March for the Xbox 360, PlayStation 3, and PC.

Sega will release an HD version of their Dreamcast hit title Jet Set Radio. This summer it will be available for download on Xbox Live, the PlayStation Network, and on the PC. To commemorate the release Sega is running a contest. They want you to send them your best graffiti art. Winners will have their work featured in the game. The deadline for submissions is March 20th. Too bad I can barely draw.

BioShock Infinite now has a release date. Irrational Games/2K announced that the game will be released on October 16th in North America, and on October 19th for the rest of the world.

I’ve been looking for an excuse to post a picture of my cat. Then I got the PlayStation Vita. This week Sony released early sales numbers for their new handheld. Four days after its North American launch last week, the Vita sold over one million units worldwide. It has some catching up to do with Nintendo’s 3DS, but it’s a good start. Early adopters shouldn’t worry, because the launch lineup is surprisingly good. But most will probably wait till the price comes down the same way the 3DS came down in price soon after release.

For those in the market for a new Xbox 360. Microsoft will release a glossy white version of the Xbox 360 S console. So far it looks like you can only get this color as part of their Kinect Family Bundle. The bundle includes a 4GB console, a white Kinect, white controller, Kinect Sports and Kinect Adventures, and three months of Xbox Live. The bundle will be $300, and the extra white controllers will be the standard $50. You should see this stuff by next week in North American stores. With rumors of a new Xbox to be announced at this year’s E3, getting a new current Xbox might not be the best idea.

The first downloadable content for Kingdoms of Amalur: Reckoning will add new places to explore, new quests, and, of course, pirates. Kingdoms of Amalur: Reckoning: The Legend of Dead Kel DLC will add the northern island of Gallows End to the world. A place with new quests, characters, and dungeons to explore. You’ll also gain access to Gravehal Keep, and new house with its own perks. The Legend of Dead Kel will be released on March 20th for 800 Microsoft Points or $9.99 on the PlayStation Network, EA Origin, and Steam.

Here are some new screenshots for the upcoming Devil May Cry reboot. By the looks of things, they’ve changed Dante’s look, and everything looks very red. DmC: Devil May Cry should be released sometime this year.