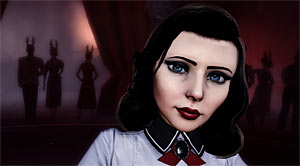 So there you have it, Burial at Sea – Episode 2 has landed and is the final downloadable expansion for BioShock Infinite on the Xbox 360, PlayStation 3, and PC. You can grab the expansion today for $15, or gain access to it via the $20 BioShock Infinite season pass. Obviously, the original game is needed to play, and isn’t available as a standalone game.

According to the games creative director Ken Levine, Episode 2 promises to give gamers up to six hours of fun depending on how you play it. In this episode, players go back to the underwater city of Rapture and control Elizabeth, a “nineteen-year-old woman who has been imprisoned in Columbia since she was an infant.” You can get glimpse of her new story in the launch trailer below.

Lastly, don’t expect to see a new sequel in the Bioshock franchise since Irrational Games shutdown in February. Levine, also the cofounder, has plans to move on and start a smaller, more entrepreneurial endeavor at Take-Two.