What’s Next For The Winners And Losers Of UFC 143 “Diaz vs. Condit”? 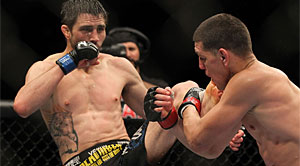 UFC 143 was, for better or worse, an event we’ll all be talking about for months to come. Now once again it’s time to ask: what’s next? What does the future hold after Carlos Condit beat Nick Diaz to claim the UFC Interim Welterweight Championship? Here’s my answer to just that: a new edition of my “What’s Next for the Winners and Losers” series of articles, now featuring UFC 143.

Next for Ed Herman

With this win I think Ed Herman has finally moved up to the middle rung of the Middleweight division. So I think it’d make a lot of sense to put him up against the UFC’s mid-level gatekeeper: Demian Maia. Maia’s striking has grown by leaps and bounds compared to his UFC debut, and his ground game is still as good as it’s ever been even if he never seems to use it nowadays. This would either be a good rebuilding fight for Maia or a strong indicator that Herman’s comeback has some real fire behind it, so I’m all for it.

Next for Renan Barao

At this point I think Barao is ready for a shot at the UFC Bantamweight Championship. Barao didn’t crumble under pressure like I thought he would, if anything he looked more confident and composed than ever. I don’t know if Barao wants to sit out while Dominick Cruz and Urijah Faber coach a season of the Ultimate Fighter and then fight each other, but if he doesn’t, it’ll probably be explicitly stated in his next bout that if he wins he gets a title shot.

Next for Josh Koscheck

Next for Fabricio Werdum

I’d certainly love to see Werdum take on Antonio Rodrigo Nogueira, but it looks like Big Nog will be out for a while. If not him, I’d like to see Werdum face either Frank Mir or Cain Velasquez. Those are two big fights for all involved, and a win in either of those fights could push either of those fighters into immediate title contention. Fabricio Werdum showed that he’s capable of being a top-tier Heavyweight in the UFC, I say it’s time to see if he’s ready for an actual title shot.

Next for Nick Diaz

This is what I’ve been saying to my friends: if Nick changes his mind, he’ll continue to fight in the UFC and I guarantee he’ll be champion one day. If Nick won’t change his mind, he’ll stop doing MMA completely and switch over to boxing. If Dana White tries to hold Nick Diaz hostage and threatens to sue him for breach of contract, Diaz will toss up the middle fingers and tell White to go ahead and sue him. No matter what happens, Nick Diaz will do what he always does: whatever he feels like.

Next for Carlos Condit

Depending on how quickly he heals, Georges St. Pierre. And if Condit does face GSP, I think we all know what’s going to happen: he’s getting taken down for five rounds. There is no escaping George St. Pierre’s takedowns, it may as well be a fact of life that once GSP grabs hold of you, you’re going down. Condit will have the same “puncher’s chance” that all of the other strikers GSP has faced have had… but we all know how those fights turned out.