Crash Course: Everything You Need To Know About UFC 143 “Diaz vs. Condit” + UFC Primetime [VIDEO] 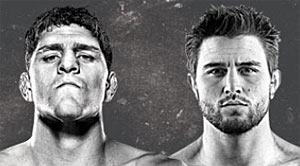 Hello once more fans and friends and welcome to the latest edition of “Crash Course”. “Crash Course” is a series of articles designed to give readers a quick rundown on all the relevant information they need to know heading into an upcoming major MMA event. Everything from why you should watch, what you should expect in the co-main and main event, and even where and when you can find it on TV is all covered in detail. So let’s get right to it with today’s edition, featuring UFC 143: Diaz vs. Condit.

UFC 143 “Diaz vs. Condit”, currently scheduled for Saturday, February 4, 2012 at the Mandalay Bay Events Center in Las Vegas, Nevada. Two preliminary bouts can be seen at the UFC’s Facebook page starting at 7:00 PM ET. Four more prelims can be seen as part of a “UFC on FX” broadcast starting at 8:00 PM ET. The five-fight Pay-Per-View card is scheduled to begin at 10:00 PM ET.

Why You Should Care

This event will see the crowning of a new champion, albeit an “Interim” champion while current UFC Welterweight Champion Georges St. Pierre is on the sidelines due to a major injury. Nevertheless, the main event of Carlos Condit vs. Nick Diaz should be a tremendous match-up.

What to Look Forward to in the Main Event

Don’t blink. Fans and the media say that all the time when it comes to fights like these, but it’s never been truer in the case of a fight between Carlos Condit and Nick Diaz. Both fighters have made their careers off of getting into their opponent’s face, beating them to a pulp, and then more often than not dramatically finishing them. This is going to be an all-out war from the first bell to the last, regardless of how long this fight goes.

What to Look Forward to in the Co-Main Event

Fabricio Werdum is returning to the UFC with an interesting mix of fan hype and fan nonchalance. Werdum is still “the man that beat Fedor”, but he’s also the man that had a very boring fight with Alistair Overeem recently. Roy Nelson, meanwhile, always seems to be right on the verge of title contention before being dealt a tough loss. This is a big proving point for both fighters, and if they show up at their best we’re in for a really fun fight.

Why You Should Watch This Card

The prelims (even the ones on Facebook) are stacked. The main Pay-Per-View card is stacked. In addition to the two big fights anchoring the event, you’ve also got a great lighter-weight fight in Renan Barao vs. Scott Jorgensen. You’ve also got bad-boy extraordinaire Josh Koscheck in action. This card simply screams “must watch”.

Why You Shouldn’t Watch This Card

The only real problem I have with this card is that Ed Herman vs. Clifford Starks doesn’t belong on a Pay-Per-View of this caliber. That’s not said to disrespect either fighter, but if that fight could’ve been replaced by another fight featuring one or two top-level UFC stars… then this could’ve easily taken Event of the Year. That’s the only complaint I have, other than that I absolutely cannot wait to see this show.

No matter what happens, I have a good feeling that UFC 143 is going to be an Event of the Year contender. There are too many good fights; there are too many awesome fighters. The UFC pretty much hit it out of the park when it comes to the matchmaking for this event. So long as the fighters themselves deliver, this should be one event we’re all talking about for months to come.