Stuart Gordon’s Lab Report: I Am Not A Hamburger! 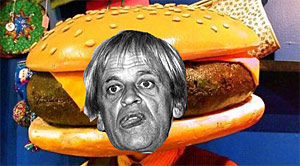 In an excerpt from his blog at Fullmoonhorror.com, Stuart tells of a psychotic episode involving Klaus Kinski, star of the Empire Pictures thriller, Crawlspace.

When I arrived in Rome to direct Dolls, the first film in a three-picture deal with Charlie Band’s Empire Pictures, I found the studio already bustling with new productions.

John Buechler was hard at work directing Troll on one of the enormous soundstages. And David Schmoeller was on another in the midst of Crawlspace, starring the famous international star and infamous madman, Klaus Kinski as a peeping-tom landlord who spies on his beautiful women tenants through the building’s heating ducts.

An excellent director, David had achieved fame with the now classic Tourist Trap and would go on to direct the original Puppet Master, beginning Full Moon’s most successful franchise. An easy-going Texan, he welcomed me to the studio and instantly made me feel right at home. So I was a bit shocked the next time I saw him and he told me how Klaus Kinski had tried to murder him.

Kinski’s reputation for maniacal behavior goes back to 1965, when he appeared as a chained up political prisoner in Doctor Zhivago and director David Lean got so fed up with him that when the cast and crew broke for lunch he left Kinski chained to the set. During the making of Fitzcarraldo, director Werner Herzog, driven to the breaking point by Kinski, ended up bringing a loaded gun to the set and telling Kinski that he had “one bullet for you and one for me, so let’s get to work.”

Known for brilliant performances and eccentric behavior, Kinski’s deal with Empire for Crawlspace stipulated that he was to be provided with not one but two hookers after each day’s work.

And watching the finished film, it is clear that all of his co-stars are literally afraid for their lives in the scenes they play with him, which gives the movie an especially heightened level of tension and suspense.

The day of the attempted murder, Schmoeller had been talking with Kinski about his character’s death scene and Kinski had looked at him strangely and said, “You are telling me how to die? Have you ever died?” Then, his voice rising to a shriek, he closed in on Schmoeller, “Maybe I should kill you and then you can tell me what it is like to die!” And he grabbed David by the throat and began to strangle him.

You are telling me how to die? Have you ever died?

Luckily, the crew was able to pull him off, leaving the director bruised and badly shaken. Schmoeller called an end to the day’s shooting and meetings were held about replacing Klaus. And since the discussions were taking place in Italy, one of the suggestions involved getting the Mafia to take out Kinski permanently. “I am not a hamburger!”

But David decided to persevere, realizing that Kinski’s brilliant performance was providing him and the studio with a terrific film if he could just survive until Kinski wrapped. Schmoeller knew that the last days of shooting involved Klaus crawling around in the duct work, and since they were made of sheet metal they became incredibly hot under the stage lights. “I am not a hamburger!” the actor roared. “I am Klaus Kinski!”

This was told to me by Billy Butler, now one of Full Moon’s finest directors, but then a special effects make-up assistant. We were leaving the studio at the end of a long day and as we passed Kinski’s dressing room, Bill couldn’t resist pounding on his door and screaming in a bad German accent, “I am not a hamburger!”

Laughing, we left the building and were crossing the parking lot when Bill looked back over his shoulder and froze. “Oh shit” he gasped, his face draining of color. I turned to see what was frightening him. And silhouetted in the window of his dressing room was Klaus Kinski looking down at us like the Grim Reaper. “I’m a dead man,” Bill told us. “I have to make him up tomorrow morning.” We went out for drinks and all night Bill was trying to decide if he should book a flight back to L.A. or show up at call time to face the wrath of Kinski.

He chose the latter and told us that Klaus had never been nicer to him. Maybe he thought Billy’s antics were funny, or maybe his two hookers had taken the edge off.

Maybe his two hookers had taken the edge off.

Teaming with Charles Band, Gordon directed Empire Pictures’ first big hit Re-Animator (1985), based on the H.P. Lovecraft tale, starring Jeffrey Combs. Stuart Gordon continued collaborating with Band, and went on to helm horror classics such as From Beyond (1986), Dolls (1987), The Pit and the Pendulum (1991) and Castle Freak (1995). Currently, Gordon continues to direct both on stage and film. You can read more entries like this one on his blog, Stuart Gordon‘s Lab Report, at fullmoonhorror.com.