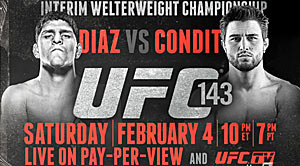 The UFC has just released the official extended preview for UFC 143: Diaz vs. Condit which, will take place on Saturday, Feb. 4, 2012, at the Mandalay Bay Events Center in Las Vegas, Nevada.

The current welterweight champion, Georges St. Pierre, is out and recovering from a second knee injury that occured during his intense training. GSP is still planning to return no earlier then October, and will eagerly face the interim champion that will unify the belt.

Also on the main fight card, Roy Nelson will take on the two-time Brazilian Jiu-Jitsu world champion, Fabricio Werdum, in a heavyweight bout. And former welterweight title contender Josh Koscheck will be challenged by Mike Pierce. Expect this Super Bowl weekend to be a memorable one, so don’t miss out on this exciting event.