MMA: If Kenny Florian Retires, How Should We Remember Him? 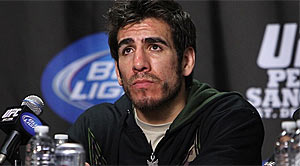 Kenny Florian: Could this be the end?

All athletes retire. All sports fans in general have come to accept this, it’s what allows us to cherish the good memories and forget the bad. Once an athlete calls it a career and stops sacrificing his or her body for our entertainment, most sensible people don’t ride that person into the ground and instead choose to think back fondly on the times where he or she shined their brightest. For former championship challenger Kenny Florian, that date may be fast-approaching. Here’s the full story as well as my reaction.

In less than two weeks from now, Florian will celebrate his ninth official year spent competing as a professional Mixed Martial Artist. At 35, Florian’s record stands at 14-6. Florian has been a UFC mainstay since 2005, when he burst onto the scene thanks to the landmark first season of “The Ultimate Fighter”.

“KenFlo” is 3-3 in his six most-recent fights, having lost to champions BJ Penn and Jose Aldo as well as former UFC Lightweight Championship challenger Gray Maynard. Sandwiched in-between those losses is a pair of brilliant submission victories over Clay Guida and Takanori Gomi, as well as a decision victory over top Featherweight Diego Nunes.

I’ll be honest, though: at 35 and with nine years of professional MMA competition under his belt, Kenny Florian was probably nearing retirement in a few years anyway. But that’s not the point. The point is this: even if Florian was headed down the road to retirement, he’s certainly earned and he fully deserves the right to retire on his own terms.

As a fighter and as a person, I like Kenny Florian. I’ll own up to the fact that he has a habit of shining in “building towards the title” fights and then not really showing up to the fights that are either for the title or will get him a shot at the title. We can debate all day whether or not that’s because he chokes in big fights or because his opponents are simply better than him. But what’s not up for debate is this: you can usually count on Kenny Florian to deliver an entertaining fight, win or lose.

And I really respect that.

As a Florian fan, I have no problem admitting and will in fact proudly admit that if he were to retire due to a back injury, I would put on my rose-colored glasses and keep them glued to my face whenever the subject of Kenny Florian arose. I’d remember the good times, the great times, the “I finish fights” and “I want BJ’s belt” times. I owe that to him as a fan, and if his career does end due to an injury, I think I owe that to him as a compassionate human being.

Hopefully I’m not alone in that sentiment.