One Of The Best Bantamweight Prospects, Miguel Torres, Makes His Way Back Into The UFC 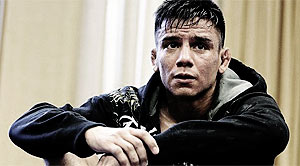 It has been weeks of silence on Miguel Torres’ future in the MMA, since making a careless rape joke on his Twitter account. Dana White subsequently made the drastic call to cut the fighter from the UFC’s Bantamweight division.

Torres tweeted the hurtful joke, which infuriated White, while watching an episode of Workaholics on Comedy Central. Since the cut from the UFC, Torres on his own, used the weeks of silence, to make a life changing move by turning a negative into a positive. Here is how he did it, so take note people, since his story may even help you out in a troubled incident:

Before sitting down with UFC President Dana White on the situation and coming up with an excuse or explanation to give, Torres took matters into his own hands; he manned up to his actions and signed up for a rape sensitivity class. Torres also reached out to every rape crisis center in Chicago to offer self-defense courses and donate money to them. Another goal he promised to give is to use his male outreach to help, as well educate, the fans on how to respect women, and continue to raise his awareness.

Just this past UFC 141 presser, White announced that Torres is officially back in the UFC Bantamweight roster, and Torres stated that a huge relief is finally lifted off his shoulders. One can only imagine. He is grateful to be back, ready to face his next challenge in the UFC and hopes to shed blood as early as March 2012.

[My] only goal in life is to be a UFC champion, it is all that I have my eye set on. The path is set, all I have to do is walk it. – Miguel Torres

Was it right for Dana White to change his mind and allow Miguel Torres back into the UFC? Please voice yourself in the comment section below.