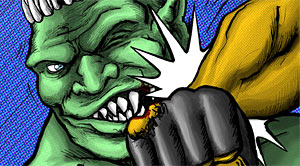 I was jolted awake around 1:00 p.m., by the sound of an urban invader disturbing the sanctity of my front porch.

Casting off a pair of boxer shorts, I raced to the front door, gun in hand, hoping to kick-start my day with a bit of old-fashioned naked violence.

What I found was a yellow parcel, blasted with stamps and crudely shoved into my mailbox. Using my mouth to tear open the parcel, like a hungry moose, I had come to realize that I’d finally received those comics that I’d forgotten I was supposed to review. Coasting on the excitement of getting to review something without having to leave the house, I rushed into the foyer, put my feet up, and dove into Bryan G. Brown’s latest, self-published works; First Fight and Monsters of MMA.

As an autobiographical work and labor of love, Bryan G. Brown has managed to chronicle his foray into the world of Mixed Martial Arts. Initially, he’s nothing more than a generally out-of-shape individual, with a romanticized view of the fight sports that he’s indulged himself in ever since he was a child. At first, he takes up mixed martial arts in order to overcome a sort of “artist’s block” that he’s come to face. Later, almost on a whim, he enters his first tournament – an ordeal that leaves him all the wiser, but ends with the soft flavor of bittersweetness.

Come Volume 2, he’s found himself swamped with work and mired in the languor of unrelenting ennui. Understandably, not much happens. Things pick up midway, though, whereas his fighting spirit is sparked once again through his frustration with fans’ questions toward future tournaments. Starting once more on the unforgiving mats of a BJJ (Brazilian Jiu-Jitsu) class, he again gets to enjoy the addicting taste of adrenaline, victory, and actualization.

First Fight represents Bryan G. Brown’s testament to his love for the martial arts, and as such, doesn’t skip on detailing his own self-doubt, nor on his feelings of inadequacy in the face of stronger, or just stronger-looking fighters. It’s not dreadfully exciting or over-the-top, as far as comic books go, but it has that genuine sense of realism, and is told in a very down-to-earth fashion. Bryan’s a regular guy who’s fond of “foods with cheese on them” and walking his parent’s late dog, Snowball. When he takes his first step onto the mat, surrounded by judges, it makes his situation all the more endearing because he identifies with all the other mixed martial arts fans who’ve managed to take the plunge, despite themselves.

If you’re into Mixed Martial arts, and want hear the true story of our own bi-weekly contributor as he throws himself into a tornado of triangle chokes and arm-bars, be sure to show your support. At $5.99 a pop, what’s your excuse?

Are YOU gonna argue with Bas Rutten?

Out of both series’ reviewed, Monsters of MMA is likely to be the work that will garner the most attention, due to the fact that it showcases “monsterized” caricatures of real life MMA fighters, and holds the distinction of being satisfyingly violent. Touching upon the imagination and hitting us with fights between our favorites that we can only dream of, I was quite pleasantly surprised with the heart that went into Monsters of MMA, or MoMMA, as I have just decided to call it.

Our first issue supplies us with an expository match between zombified Bas Rotten and beast-man Kimbo Spliced. The match itself has its own ups and downs, with Bas Rotten having the chance to showcase an exaggerated version of his signature move, the Liver Punch. Eyes are gouged, sternums punctured, and brains are devoured between matches. As an intro piece, it sets the tone very well for what will definitely be a series worth following for any fan of gratuitous violence, monster movies, or MMA.

Considering the fact that you’re currently browsing our magazine, I’ll just go and peg you as the target audience.

Volume two is presented with glorious colors this time around, and features a match between Jaguar Dos Santos, and Hulk-lookalike, Croc Lesnar. As things play out, a deeper plot is revealed, as the fight commentators turn out to be nothing more than pawns in a larger game (Big surprise there – D’ohohoho!) and things end with a triple-threat match and a cliff hanger.

If you happen to enjoy his work for Yell! Magazine, be sure to check out MoMMA – I think you’ll find that it’s a worthy read. As a freelance artist, Bryan G. Brown definitely has the boldness to do what he loves, and bring his passion to like-minded people. To me, that alone, makes him worth rooting for.

Also, the fact that I didn’t have to wear any clothes while reviewing his work helps too.

Head on over to the official site or follow Bryan G. Brown on Twitter @bryangbrown, for more information.

Or just stay here, because we got all the information you need, handsome.