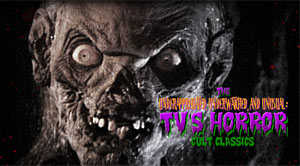 No.5 Masters of Horror

Even though it’s run only lasted from 2005-2007, Masters of Horror proved to be a highly entertaining, no-holds-barred horror television series that pushed a few new taboos and successfully got at least one episode banned. Even the weakest episodes of this weekly hour-long serial weren’t that bad. The first season alone brought us tales penned by Clive Barker and H.P. Lovecraft, and directed by horror greats such as Tobe Hooper, Dario Argento, John Carpenter, and Mick Garris.

The second season didn’t quite compare to the first one, but it had it’s moments. It shouldn’t come as a huge shock that both of Argento’s episodes rank among the goriest; first season episode “Jenifer” deals with the delicious subject of cannibalism and some seriously uncomfortable sexuality, shown in as much graphic detail as Showtime would allow (which, as it turns out, was a lot!). “Jenifer” is on my must-see list if you’re considering checking out Masters of Horror, as is “Pelts,” his second season episode.

Other highlights from the first season include “Cigarette Burns,” “Dance of the Dead,” “Sick Girl,” “Haeckel’s Tale,” and “Imprint.” Imprint is directed by one of our favorites here at Yell! Magazine, Takashi Miike (Audition). It’s the episode that was banned from being shown on Showtime, and deals with prostitution, incest, abortion, and torture – in other words, fun for the whole family! If you’re in America, you can watch the whole series on YouTube (with TV-MA censorship and commercial breaks). It’s a great way to “productively spend” a day or two, while adequately quenching your horror thirst.

The CW has recently premiered a teen witch drama called The Secret Circle, which I can’t bring myself to check out, so instead I find solace in the British series, Hex. Once again, the Brits are showing us how it’s done for the billionth time ever; Hex is the story of a comely young woman named Cassie Hughes who is sent to a private school, Medenham Hall, somewhat famous for a witchcraft scandal where all of the involved females of the family line were tried and executed.

Cassie soon comes to find that she has telekinetic, pyrokinetic, and clairvoyant powers, and is plagued by nightmares that she can’t quite make sense of. The fact that her mother is mentally unstable only complicates things and Cassie soon worries that she’s headed in the same direction. Making matters even more complicated, she’s inexplicably unpopular and has a stalker, an older man named Azazeal, who claims to be in love with her. Every woman watching this series will agree that the stalking is not a terrible fate. Azazeal is played by a pre-famous Michael Fassbender. All combined, and with your usual touch of teenage strife, you’ve got a surprisingly potent potion of awesomeness.

Full of fallen angels, ghosts, and a lot of “circumstantial magical sexy times,” Hex brings us a glimpse of what a good witchcraft-based TV series could be like. The only two seasons that it ever produced are better than a good deal of the so-called supernaturally based television programs that involve certain bishonen bros. You know the one…

No.3 Tales from the Crypt

When I was a child, we lived in a tiny house across from a graveyard. My parents have always been really into horror movies and I consistently remember begging to watch movies like The People Under The Stairs, A Nightmare on Elm Street: When The Series Got Long and Drawn Out, Friday the 13th: New York Style, Basketcase, and various other scary movies that I was strictly verboten from watching. This of course meant crouching and sneaking, RPG-thief style to the hallway corner, where I could peek into the living room and see a few minutes of exposed flesh or blood and guts.

Needless to say, the times when I got caught and put back to bed where there was actually plot going on were disappointing indeed.

But one of the things that stands out the most from my childhood was sneaking out of my bedroom to try to watch Tales from the Crypt. To this day I cannot honestly hear the opening theme and watch the credits without closing my eyes. I was sure that the Cryptkeeper was real and that he lived in the cemetary across the street. Moreso, I was positive that he was out to get me, possibly through inhaling my soul via my mouth like a cat. That never happened, but the Cryptkeeper did become one of the most well-known personas in horror, and each week he brought us his unique sick sense of humor and star-studded tales of horror that rarely disappointed.

To pick a favorite episode from Tales from the Crypt is a total Sophie’s choice. I can’t tell any potential viewers about a good starting point because it’s all just that good, but my personal favorite season is the second, but they’re all so full of epic win that you can’t go wrong no matter where you start.

Dark Shadows ran from 1966 to 1971 and even before Twilight was a twinkle in the crazy, crazy eyes of Stephenie Meyers, marketed itself to both teenagers and housewives.

Victoria Winters (Alexandra Moltke) comes to the Collins’ family who reside atop the ominously named Widows’ Hill in Collinsport, Maine, after she’s orphaned. The girl wants some answers, but instead finds ghost stories and actual ghosts – as well as witches and vampires.

If you’ve ever heard of Barnabas Collins, you should know that he’s a complete and total bad ass. Even the way he became a vampire is much better than sparkle kisses or however the hell most vampires these days are made. He was magically manipulated (no, not like THAT) by a witch into marrying her – and when he found out about her scheme, he shot her. With her dying breath, she summoned a vampire bat that bit him. You have to admit that’s fairly impressive!

Unlike Edward Cullen, Barnabas results to some pretty shady techniques in order to get the girl of his dreams, including, but not limited to, kidnapping, hypnotism, seduction, and murder. Barnabas has some serious swagger.

Dark Shadows was legendary enough to start not one but TWO revivals, one in 1991 (featuring that annoying kid from Third Rock from The Sun before he became that kid) and a scarcely remembered attempt from the WB in 2004, starring Deathproof hottie Marley Shelton. Up next for Dark Shadows will be Tim Burton’s big screen adaptation of the series, featuring Johnny Depp as a pale-skinned protagonist in strange clothing and Helena Bonham Carter demonstrating her incredible range by playing yet another crazy lady! We’re sure that new and exciting formula will make millions.

In the meantime, if you’d like to remember a time when there was a such thing as a daytime television programming worth watching, check out Dark Shadows. The not half-bad 1991 revival is on YouTube, but I recommend splurging for the DVD sets of the original. I know, I’m a vampire hipster.

At the risk of getting my balls (insert quip about being a real girl on the Internet here, insert tits or GTFO rebuttals in the comments section) busted, I just couldn’t leave this one out. While it’s technically categorized as a serial drama, Twin Peaks brings the trademark weirdness of David Lynch that unsettles, unnerves, and generally makes for an all-around riveting viewing experience.

Agent Dale Cooper (Kyle McLachlan, Blue Velvet) is an FBI agent assigned to the small, sleepy Washington town of Twin Peaks, where homecoming queen Laura Palmer (Sheryl Lee, …Twin Peaks) has been found gruesomely murdered, wrapped in plastic. Cooper is soon thrust into a seedy world of brothels, drugs, and the not-so-ideal lives of the residents of Twin Peaks.

When Agent Cooper isn’t off solving crime (and being thwarted at every possible turn), he shuns the advances of the resident teenage sex kitten (who just happens to be Laura’s best friend), talks to his tape recorder (lovingly named Diane), and has surreal dreams about a one-armed man, a midget with a strange way of speaking, Laura Palmer herself, and Bob, a demon entity who in general just serves to scare the crap out of those who come into contact with him.

Without revealing spoilers of doom and weirdness, I can’t get into the rest of the plot, but I can tell you that it gets so much more strange than the breakdown you’ve read about here. Twin Peaks was sadly canceled after declining ratings, but went on to resolve all of the loose plot ties and backstories with a motion picture, Twin Peaks: Fire Walk With Me.

Twin Peaks has become one of American TV’s best loved and iconic cult classics that deserves a little more recognition and a few new faces in the fanbase.