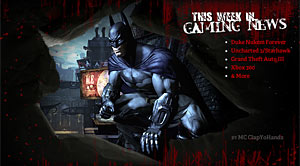 Here’s the top gaming news for the week of October 10, 2011 brought to you by Yell! Magazine

If you’re still playing Gran Turismo 5, the free “Spec 2” update came out to celebrate the game’s one year anniversary. The update added car interiors, NASCAR, more Photo Mode options, and improved load times. Additionally, next week you can make your Turismo even more Gran with a slew of new downloadable content. You can pick from a pack with 15 new cars for $8, 2 new racing tracks for $5, 90 pieces of racing gear for your virtual character for $3, or 100 new paint colors for $2. That’s a lot of content. You can save a few bucks and get all of it for $12. If you’re not interested in Forza 4, Gran Turismo 5 is now selling at the discounted price of $39.99, and the DLC will be out on October 18th.

With the Batman: Arkham City launch imminent, WB and Rocksteady announced the Nightwing downloadable content. He will be available on November 1st and includes the “Wayne Manor” and “Main Hall” Challenge Maps. The Robin Bundle Pack will be available on November 22nd. Both character packs will be 560 Microsoft Points in the Xbox Live Marketplace, or $6.99 on the PlayStation Network. But before you get any of this, look for a review of Batman: Arkham City here at Yell! Magazine.

Is that Xbox 360 hard drive of yours feeling a little cramped? This fall, Microsoft is coming out with a 320GB hard drive replacement for the Xbox 360. The only other way to get that size hard drive is to buy the Gears of War 3 Xbox 360 Bundle, or the Star Wars Xbox 360 Kinect Bundle if that ever comes out. Speaking of Star Wars, the hard drive will come preloaded with a copy of Lego Star Wars III: The Clone Wars. The 320GB hard drive will be compatible with Xbox 360s and will retail for $130. Expect it on store shelves sometime this holiday season.

Are you one of the many people who bought Duke Nukem Forever out of some morbid curiosity? Well, if you want a little more out of Duke, you can now get the Hail to the Icons Parody Pack downloadable content. The pack includes three new game modes, and four new multiplayer maps. The DLC is available now in the Xbox Live Marketplace for 800 Microsoft Points, or $9.99 on the PlayStation Network and the PC.

Bioware confirmed this week that Mass Effect 3 will in fact have multiplayer in the form of extra co-op missions. Thank God it’s not some silly throwaway team deathmatch versus mode no one would play for more than five minutes. The four co-op missions and the multiplayer campaign, Mass Effect 3: Galaxy at War, won’t let you play as Commander Shepard and his regular crew. Instead, these missions will support four-player co-op, and you’ll be picking from an elite special forces squad of character classes and races to do missions that will have a direct impact on the main single player campaign. More details on the multiplayer will be revealed before the game launches on March 6th. Stay tuned here at Yell! Magazine for more Mass Effect 3 news.

This fall, to celebrate its 10th anniversary, Rockstar Games is releasing Grand Theft Auto III for Apple and Android phones and devices. But that’s not all, for those with cash to burn, and a love for all things Grand Theft Auto, Rockstar Games is also releasing a limited-edition 1:6 scale figure of GTA III main character Claude to commemorate this occasion. The highly detailed figure will come with his standard bomber-jacket look as well as a prison uniform, and an array of weapons. The figure will set you back a cool $150.