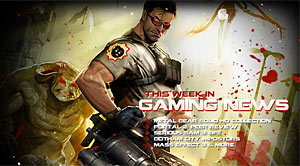 Sorry for the delay on bringing you the week in gaming news — Holiday Weekends offer some logistic challenges we haven’t quite figured out yet.

The iPhone 4S will be out next Friday, on October 14, and iOS 5 will be released a few days before that on October 12. The iPods got a refresh too. That’s all well and good, but that’s not really the story this week… but first the news.

Including an art book in your game’s special edition goes without saying. Metal Gear Solid HD Collection: Limited Edition will come with the mother of all art books. The Art of Metal Gear Solid is a huge 248- page amalgamation of everything Metal Gear. Concept art, early sketches, paintings, and anything else they could think of. The games are more of a bonus. I probably won’t play the games in the collection, and just get this for the sweet coffee table art book.

Valve promised Portal 2 players some free summer DLC. Luckily it’s still a little warm in October, because now you can download “Peer Review.” GLaDOS is back to torment us with new single-player and co-op challenge rooms. If that wasn’t enough, in co-op, you and friend can continue the adventures of P-Body and Atlas and figure out what happened to all these pesky test subjects. Download it now for free on Steam, PlayStation 3, and Xbox 360.

File this under, games I could care less about. The release of Serious Sam 3: BFE just got pushed back, and for good reason, but it’s still not exactly sitting pretty. Sam was suppose to be released right next to Battlefield 3. Assuring that it will be flying under the radar with little to moderate sales. Now, Serious Sam 3: BFE will be released on November 22. That’s roughly around the same time as another big game with the number 3 in the title, sales juggernaut, Call of Duty: Modern Warfare 3. This assures that the only people getting Sam 3 are kids with grandmas that got them the wrong game. Good Luck Sam!

When I think Batman, the first thing that comes to mind has always been the team-based first-person shooter. Well, not really, but Gotham City Impostors is trying to make that happen. The beta just ended, and it’s gonna be around $15 or 1,200 Microsoft Points at release. Still no release date, but we should get our team Batman vs. Team Joker soon, here at Yell! Magazine.

Why are you reading this? Go download Chrono Trigger right now on the PlayStation Network. It’s $10! I remember back in the day, I paid $80 for a copy of Chrono Trigger on the SNES, and now I can get it for $10. You’d be crazy not to buy one of the great role playing games ever made. Stop reading this, go now!

Thanks to an article in Xbox World magazine, rumor has it that Mass Effect 3 will come with some sort of multiplayer component. I guess I’m not surprised, EA’s big on their online passes, and supposedly the collector’s edition of Mass Effect 3 will come with an online multiplayer pass. Speculation time, we’re either getting, Shepard-vs.-Shepard-team deathmatches, story mode co-op play, or both. Is it needed? Probably not. Is it a good business move? Well, with the amount of used copies of Mass Effect 2 laying around, I guess it is. And I can’t blame them for trying to reduce used games sales, and make a little extra on the side. As long as the single player is still top-notch, I’ll be happy.

The first piece of Gears of War 3 DLC will be out soon. Horde Command Pack will add new Horde, Beast, and versus Mode maps, three new characters, and a pair of weapon skins. Included are also a few new toys for Horde mode. You’ll be able to build the new Command Center to call in snipers, mortars, and a Hammer of Dawn. Additionally, decoys can now be upgraded to Onyx bots, you can add fire bolts to sentries, and you can now add rockets to Silverbacks. The pack will be $10, or 800 Microsoft Point, but if you bought into that Season Pass deal, it’s already yours.

With the fall Xbox 360 Dashboard Update, this holiday season the Xbox will be getting on-demand streaming TV. And like usual, Canada is getting short changed. The U.S. gets SyFy, North of the border, they get Disney XD. You can still get Netflix, and buy shows off of Zune, if you’re into that sort of thing. Carriers such as Telus and Rogers will offer on-demand content. Sports fans will have UFC and something called Maple Leaf Sports & Entertainment/Real Sports, whatever that is. You get what you paid for, and this stuff will be free, so don’t expect much. But you are expected to have a Xbox Live Gold Membership in order to access any of this “great” content. TV on your Xbox goes live sometime this holiday season.

Steve Jobs… I wanna say my piece. I remember my first iPod, it was pretty cool. I had other MP3 players, but nothing was as intuitive. I still have one of those Classic iPods with the click wheel. I was playing around with it recently, and it still holds up, no wonder they’re still selling it. You know what I love, their customer service. I’m the type of person who never buys extended warrantees, because they’re always garbage. But that Apple Care stuff is pretty cool, and if you call them for anything, with or without Apple Care, they are genuinely really nice, and try everything to help you. I tell everyone who gets anything Apple to get the Apple Care too, because it’s such a great service. The iPods, iPads, and MacBooks are all great products, but no one ever points out how nice of a company Apple is. I’m not talking about philanthropy, I mean actually nice. A company culture that is genuinely nice to their customers. I believe that’s the legacy Steve Jobs will leave.

Be sure to check back NEXT FRIDAY on the latest gaming news at Yell! Magazine.