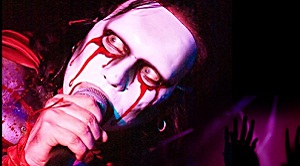 Lizzy Borden, named after the notorious New England woman, Lizzie Borden, who was tried and acquitted for killing her father and stepmother, has always been a tough band to categorize. There’s no denying that they are a shock-rock band heavy on theatrics, but at the same time they’re an epic glam metal band with elements of power metal. In the end, it’s a kick-ass recipe for some wicked tunes and a great stage show. Seriously, how does horror, sex, and metal not make for a memorable event?

As stated, Lizzy Borden is a highly theatrical band that features scripted and simulated death, blood, sexy dancers, axes, costumes, vampirism, and much more. Yes, the band has shifted its look from horror glam to goth, but that doesn’t categorize them as poseurs. So, all of you uneducated trolls out there posting comments about Lizzy Borden being fake or mocking how they’re glam with a death metal look, do your research before commenting (you won’t look so stupid if you do). It’s baffling that the generation making these shitty comments about something they don’t understand grew up with a world of information at their fingertips and can’t or refuse to use it. Morons. Two minutes of Internet research would inform you that Lizzy Borden established themselves long ago as a band based on their look (this is if we ignore the excellent songwriting, playing, and singing), and as such they are entitled to change it up how and when they see fit.

OK, my rant is done.

The point of this article is to let you know that Lizzy Borden is about to take to the road again. The new tour is called Death Takes A Holiday Tour. A few of the dates to note include: November 19th, in Guadalajara, Mexico, at the Hell and Heaven Festival where Megadeth will also play a set; November 25th, at the Christmas Metal Festival in Lichtenfels, Germany, with Saxon and Lordi; and December 2nd, in Prestatyn, North Wales, at the Hard Rock Hell Festival with Ace Frehley and the Quireboys.

You can be sure to see newer material such as “Under Your Skin” and “Tomorrow Never Comes,” but if you have any luck you’ll also see such classic gems as “Me against the World,” “American Metal,” “Master of Disguise,” “Psychopath,” “Love You to Pieces,” and “Master of Disguise.”