UFC Live On Versus 5: A Stunning Loss By Jim Miller 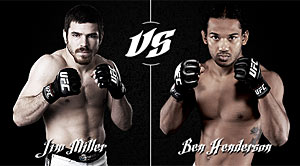 Jim Miller, since joining the UFC, has been like a bull running through almost every fighter who was stupid enough to get in the Octagon with him. Casualties include David Baron, Matt Wiman, Mac Danzig, Steve Lopez, Duane Ludwig, Mark Bocek, Gleison Tibau, Charles Oliveira, and Kamal Shalorus. All of his wins, and his losses for that matter, were spectacles of brute force and superior technique. When he didn’t beat the crap out of his opponent, he submitted him; sometimes both simultaneously.

To further explain what a force inside the Octagon Jim Miller is, his 9 wins were against fighters who were a combined 126-29-3 (W-L-D) at the time they fought the New Jersey native. Add to this that Miller’s only defeat inside the Octagon was a decision loss to Gray Maynard, and his only other loss in his career was against UFC lightweight champion Frankie Edgar (way back at Reality Fighting 14 in 2006), and you understand that many, including myself, saw Miller as a shoe-in for lightweight champion in the not too distant future.

That is, until he faced Ben Henderson at UFC Live on Versus 5 a few days ago in Milwaukee. Henderson came over from the WEC when the promotion was bought by Zuffa, LLC and then soon after merged with the UFC. When speaking of the fighters in the WEC at lightweight, they were thought of as lower caliber when compared to their counterparts in the UFC. That assumption has been proven wrong over the last few months as former WEC fighters are succeeding with great aplomb when facing the roster of established fighters already in the UFC. But that topic is best left for another article.

What for most was a great surprise, Henderson beat Miller and in doing so derailed the New Jersey boy’s chance at a title shot against the winner of the Edgar/Maynard fight coming up at UFC 136 this October. The surprise that everyone felt wasn’t so much that Miller lost, although that was not a prediction most would have made, since Henderson was a champion in the WEC, but was the fashion in which he went down to defeat. Henderson destroyed Miller. The fight went to a decision, but it was only Miller’s famous toughness and will to never give in, that made the fight last the full 15 minutes.

Henderson pounded the shit out of Miller. Miller attempted numerous submissions to Henderson’s legs, arms and neck, both while standing and on the ground, but Henderson used his superior strength to force Miller to break the holds and then brutalized the man to a bloody mess. If Miller thought he was the toughest man in the lightweight division, he must now rethink that assumption.

The Miller/Henderson fight, and all other matches like it, are the perfect example of why fight fans should watch MMA. You think you know who will win a fight, and invariably, much to your surprise, your prediction proves incorrect.