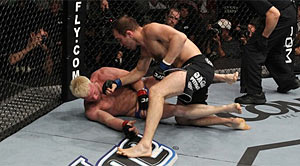 Anyone who watched UFC 133 last week didn’t come away with memories of Rory MacDonald’s decisive win over Mike Pyle, which gave credence to many fan’s belief they were looking at the future UFC welterweight champion. Nor did they come away with what looked like Vitor Belfort’s re-emergence to middleweight contention in his destruction of Yoshihiro Akiyama.

What they do remember, and much to their own chagrin, will always remember, is Dennis Hallman’s attire when he entered the cage to face another fighter with little sense in fashion in the name of Brian Ebersole.

It’s been seven days since I watched Rashad Evans return from injury and remind Tito Ortiz that he is past his prime and I still can’t exorcise those swimming trunks from my mind. As for Ebersole, I barely saw him punch the living daylights out of Hallman because I was too busy looking up to the rafters to see what the arrow on his chest was pointing to.

Ken Shamrock must be at home scouring storage boxes for his old UFC VHS tapes to see if he looked as ridiculous as Hallman did at UFC 133. Don’t worry Shamrock, when you wore those trunks, you were the baddest man on the planet.