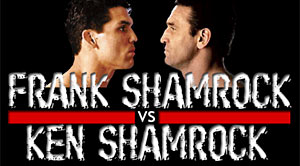 After Spike TV’s Bound by Blood, a documentary that aired two weeks ago about the fight career and turbulent personal life of Frank Shamrock (23–10–2), you could have assumed that a fight between he and his brother Ken Shamrock (28–15–2) would happen soon in Bellator. Ken said that the only way the two legendary brothers could ever get any closure and move forward from the past would be to fight each other. It stunned Frank, who spilled his heart out to Ken in the documentary, but both of them only agreed to forgiveness.

Frank recently touched on that emotional moment, confirming that it wasn’t the “idea for the documentary” and that he is retired:

We had an opportunity to fight a long time before, I worked really hard on it and it didn’t pan out. That wasn’t my idea for the documentary. I’m retired. I can’t imagine anyone punching on me or hitting me. It’s not even in my consciousness.

With that said, I think the idea of Frank fighting Ken is officially out of the question, and it can be finally squashed. Unless, Frank later decides to come out of retirement.