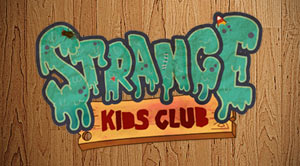 Montgomery, AL – Listen up all you strange kids! Strange Kids Club is coming up with its very first Halloween Costume Contest and we want you to be a part of it! What better way to win free stuff and have some fun than to break out your Halloween spirit a little early and dress up like your favorite monster, ghoul, creep, or superhero?

Now we hard at work on our second issue (due out October 2011) and in the spirit of its upcoming release we’ve teamed up with our generous friends at Trick or Treat Studios and 8-Bit Zombie to challenge our fellow strange kids to come up with the coolest costumes they can for the 1st Annual SKC Halloween Costume Contest!

A selected few will see their entries printed in the anthology itself while One Grand Prize Winner will walk away with $125 in SKC and Halloween-related merchandise that includes a Nail Mouth Halloween Mask sculpted by Justin Mabry (based on original artwork by David Hartman), a Limited Edition Strange Kid T-Shirt illustrated by Glen Brogan, a FREE copy of our Halloween anthology and more!

Contestants can express their creativity by putting together the most face-meltingly awesome costume they can and sending us their entry in the form of a photo. The costumes can be from any other convention or cosplay event as long as they were created in the past month. Entries for the 1st Annual SKC Halloween Contest are due no later than Wednesday, August 31st, 2011 at 11:59PM (EST).

All submissions can be made by visiting this link or by emailing strangekidsclub@gmail.com and must include the following information: full name, age, address, email, and the name of the character you’re dressed as if applicable. Submissions CANNOT be digitally enhanced or tampered with (that means no Photoshop) at all and should be recent.

All SKC club members who follow us on Facebook will get the chance to vote on the submissions between September 1st and September 8th (2011). A final decision for the Grand Prize will be at the discretion of Strange Kids Club Editor-in-Chief, Rondal Scott. All winners will be announced shortly after October and will be featured in the anthology as well as posted on the website.

This contest is sponsored by Trick or Treat Studios and 8-Bit Zombie.

Strange Kids Club is an online digest of the strange, creative and nostalgic-laden internet with a growing readership of fanboys and fangirls who are obsessed with gaming, animation, film, toys and comics. The site features a variety of content from entertainment news, reviews and exclusive interviews with both well known and up-and-coming artists on a daily basis.