Army Of Darkness Defense For iPhone: A MiniMatt Review 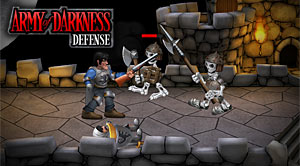 Yawn! Another day, another tower defense game in the App Store. It seems like there’s nothing but TD and Zombie games in there nowadays. But wait, faithful readers, what’s this? Chainsaw hands? Double-barreled, S-Mart shotguns? A square-jawed, impossibly handsome, wise-ass hero stuck in some plague-infested locale fighting off hordes of the undead? This can only mean one thing…

No, no, no… much less horrible than that. Don’t break out the Bengay just yet. This is a review of Army Of Darkness Defense, available on the App Store for the grand sum of zip, squat and nada. For absolutely nothing you can get about 1-2 day’s worth of excitement off this thing, depending on your skill at fighting off increasing waves of Deadites. There’s a total of 50 waves to conquer, with some devilishly clever ones at later levels. Once the game starts throwing boss units at you, it can get a bit hard. Once you’ve mastered all 50 levels, you can unlock an endless wave mode and share your high scores with friends online.

Tower Defense games live or die based on the variety of troops and weapons you can unleash on invaders and Army Of Darkness, being based on Sam Raimi’s immortal Evil Dead franchise, ranks right up there with the best of them. You control Ash Williams as he moves left or right across the screen, chainsaw and trusty shotgun in tow. As Ash, you can have two special abilities equipped at any time, switching between them at the start of each wave. You have your shotgun blast, a catapult strike, spell books to swallow enemies or randomly summon soldiers to your side and, best of all, you can call on your modified Deathcoaster (actually Ash’s car) to mow down the undead like tenpins.

Troops run the gamut from low-level peasants (basically cannon fodder) to high-level movie character hero units like Arthur and Henry The Red. Achieving success means finding the right combination of units and triggered abilities to overcome any given wave’s unit composition. It’s relatively easy, I managed to beat the game in about two days of moderate play time. All in all, a very fun game, with nice graphics and sounds, though you’ll get tired of hearing Ash’s famous lines repeated over and over again.

It’s free, it’s a great time-waster, it’s based on one of the coolest movies ever made. Go get it! THIS I COMMAND!