inFAMOUS 2 Review Or: Indulging Your Dark Side And Fun With Senior Citizens 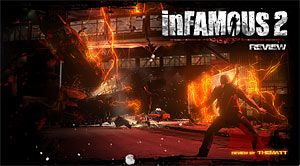 It seems like you can’t throw a stone these days without hitting a sequel (or your neighbor’s satanic children. What? You’re saying that’s just me?). We have upcoming entries in the Halo, Uncharted, Mass Effect, Assassin’s Creed, Gears Of War, and Elder Scrolls franchises… just to name a few. Heck, even the massive box office bomb Green Lantern is apparently getting a sequel, which just goes to prove that if you gross even a few bucks over your bottom line, you’re getting a follow-up. It’s a sequel world, my loyal brain-dead zombies… I mean, readers… where you’re bound to be completely lost if you don’t know which number that Roman numeral next to a game’s title stands for.

Enter: inFAMOUS 2, sequel to 2009’s Grand Theft Superhero game. inFAMOUS was a sandbox-style product that presented you with a wide-open world filled with people to save, tasks to accomplish, and collectibles to amass. Or, depending on what mood you were in when you popped the disc into your PlayStation, a world filled with little old ladies to mug, civilians to blow up and kiddies to orphan.

inFAMOUS, which cast you in the role of newly christened superhero Cole MacGrath, gave you a lot of freedom when deciding which side of the moral divide you wanted to fall in. You could choose to be a goody two-shoes, helping old ladies in walkers cross the street, or you could be a downright evil bastard and kick that same old biddy in front of a bus. Care to guess which way my moral compass pointed during my play through? I’ll give you a hint: there’s a grandma-shaped stain on the front bumper of the 5:30 to Downtown.

In my defense, I may have totally misinterpreted this sign.

inFAMOUS 2 features a change in locale, new characters to interact with, and a storyline filled to the brim with opportunities for you to bring out your inner hero. Or to indulge in a bit of wanton, apocalyptic violence against whomever looks at you sideways. Entirely your choice. Really. No pressure. I won’t force you to do anything you don’t want to do. Though if you hear heavy breathing and odd chainsaw-like noises from under your bed tonight, I can promise you that I’ll have a very good alibi for that time period.

This is Yell! Magazine’s review of inFAMOUS 2, available exclusively on PlayStation 3. The PlayStation 3 version was used for this review. (Well, duh.)

Picking up a short month after the first game’s conclusion, inFAMOUS 2 finds Cole in a New Orleans-type southern city by the name of New Marais. New Marais has a very Dixie feel to it, complete with French Quarter-style buildings and streets and surrounding swamplands. But Cole isn’t here for the gumbo. During the events of inFAMOUS, and in true comic book fashion, Cole’s alternate-timeline self gave the young hero a warning of impending doom: a creature of vast power, known only as The Beast, is making its way down the Eastern Seaboard of the United States, inexorably drawn to Cole’s new-found powers. You, as Cole, must learn brand new powers and study ways to increase your store of energy in order to prepare for a final confrontation with your arch nemesis.

Sucker Punch Productions has done a very good job of making both of the inFAMOUS games feel like issues one and two of a new comic book series. inFAMOUS was the origin story and inFAMOUS 2 is our protagonist’s first major confrontation against an all-powerful super villain. inFAMOUS 2‘s ending varies greatly depending on your actions throughout the story, but one thing remains constant: the door is left wide open for a third game in the franchise.

As in the original inFAMOUS, playing as either a naughty boy or a boy scout earns the player differing rewards and powers. This mechanic is given even more importance in inFAMOUS 2 due to the addition of two very important supporting characters: Kuo and Nix. Both females, in addition to being interesting characters, are presented as the classic Angel and Devil on your shoulder. Kuo’s powers are ice-based and she pushes Cole to seek more diplomatic solutions to his problems. Nix, wielding flame powers, is by her very nature a hothead and will definitely appeal to the darker side of your nature. The choices Cole must face aren’t always as clean cut as good and evil, both your muses have valid points to make concerning your missions. Just because 9 times out of 10 I decided to torch the orphanage instead of saving a bunch of whiny, unwanted kids doesn’t mean I didn’t take the time to carefully consider the philosophical implications of Kuo’s arguments concerning…

Sorry. I couldn’t keep typing that with a straight face. What? It was the 4th of July! I wanted to see the kids go up like little human fireworks.

Immediately after this I saved a cat from a tree. Honest.