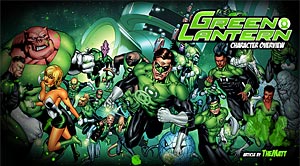 Opening June 17th in theaters everywhere, Green Lantern is the third comic-based movie to be released so far this summer. It also has the most riding on its green shoulders. While movies based on Marvel Comics properties (Thor, X-Men: First Class) have practically become a summer movie tradition, fellow publishing house DC Comics, affectionately referred to as “The Distinguished Competition” by fans, has had poorer luck getting its characters to star in big-budget productions. As such, there’s a lot riding on the Green Lantern Corps.

The ratio of DC movies to Marvel movies rests somewhere on the 10 to 1 scale. Yes, Christopher Nolan’s relaunched Batman franchise is a shining gem of the genre, but Bryan Singer’s attempt to make the Man Of Steel relevant again in Superman Returns, while not the financial bomb many believe it to be, in no way revived interest in Clark Kent’s cinematic adventures. The less said about Zack Snyder’s upcoming Batman Begins-like reboot of the Superman movie series, starring very British actor Henry Cavill as the all-American superhero, the better.

Superman and Batman have always been the two biggest guns in DC’s arsenal of characters. A catastrophic attempt to shoot a pilot for a potential Wonder Woman TV show ended in complete rejection by its parent network and a long-gestating Flash movie is in no way doing its hero justice by being slower than a speeding tortoise.

The only other DC staple to get any traction in recent years is Green Lantern and the Green Lantern Corps. A spectacularly idiotic early attempt to make a movie starring the emerald warrior took the form of a Jack Black vehicle, which would have starred the comedian as the titular character, would have featured such sights as Green Lantern’s power ring creating giant condoms and would have turned Green Lantern himself into a lecherous, sexist parody of himself.

Luckily, cooler heads prevailed and the whole project was mercifully flushed down the crapper. Several years, scripts, and producers later, Green Lantern, starring a somewhat more acceptable Ryan Reynolds and directed by James Bond-franchise veteran Martin Campbell, looks to be a worthy adaptation of the comic book hero’s legacy. Whether you’ve ever picked up a comic before or not, everybody could use a little refresher on the Green Lantern universe and its inhabitants. So, without further ado or adon’t, your faithful Guardian presents, direct from the planet OA at the center of the universe, a general overview of the Green Lantern Corps. characters coming soon to a theater near you.

Get your Green Lantern Corps. education underway after the jump…