Straw Dogs Has a Remake, Will It Be Any Good? 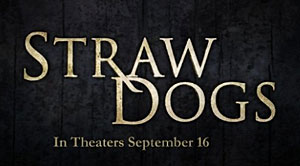 Anyone who is an extreme fan of Sam Peckinpah, as we are at Yell! Magazine, knows that you don’t fuck with the man’s body of work. There is no need to. It’s gritty, violent, dramatic, ballsy, and stands the test of time. Unlike other films, which when first released are considered great, but then decades later devolve into cheese as advances in technology, acting abilities and style come about, Peckinpah’s rarely become dated. Unfortunately for us film buffs, these movies are usually the ones prone to remakes, prequels, sequels and re-imaginings.

In September, Screen Gems is set to release a remake of one of Peckinpah’s most controversial films. Straw Dogs, with it’s now famous rape scene and gratuitous murders, was banned in England until the turn of the millennium, and that was even after it was trimmed to receive a R rating at its release date back in 1971. So it raises the question, why is it in need of an update?

What made the film great, and panned by any feminist who ever saw the film, was the way Peckinpah played with the viewers sense of morality. He took rape out of the black and white and slammed it full force into the grey. He even slapped every person with the creed of “no means no” when it comes to sexual assault, forcefully across the face. All of the excuses rapists had used to get free in court were up on the screen for everyone to see. Amy Sumner liked to go bra-less, she had a look in her eye of sexual desire, and therefore she was asking for it. Her husband was an inadequate man too-boot and her rapist looked on it as an invitation.

Not satisfied with the mere preliminaries of sexual invitation, Peckinpah even had Amy battle in her head, during the rape, whether she actually enjoyed the sexual violence being perpetrated on her by her ex-lover. It shows up in her face and actions, and this is where Peckinpah really fucks with your head for the first time.

But does Peckinpah leave it at that? Does he let you retreat and recover your sense of self? No he doesn’t. While your still battling with the voices in your head trying to answer the question every man has when faced with a flirtatious woman who seems to be inviting him into a sexual encounter but has no intention on seeing it through, that is, does she want me to force her? is she the type who likes to be manhandled? where do I draw the line and stop? Peckinpah then throws at you another dilemma.

David finds out about the violence. He finally comes out of his timid shell and mans-up. But he doesn’t turn from a pacifist into a well-adjusted human being. The rape of his wife and now the imprisonment inside his house by Charlie and his buddies brings out a vengeful animal. He doesn’t just defend himself and his wife, he takes visceral pleasure in inflicting pain and death on his enemies. You must cope with the violence and summon your sense of right and wrong to try to figure out whether what your seeing is justifiable. You jump back and forth between the one part of you that realizes that given the same situation you might do exactly as David is doing and take pleasure in it just as much as David seems to be and the other part of you that is disgusted by this enjoyment.

Knowing that these questions are continually being asked to this day, meaning that the film remains and always will remain relevant, why remake it. If the answer to the rape question posed in Straw Dogs needed answering, The Accused did that job already. But that seems to be more beside the point as the trailer seems to indicate a direct retelling of the original story. Since we know that the film is not rated X and therefore can’t be an exaggeration or more extreme version of the original, we must again ask, what’s the point? As to whether the film will be any good, we’ll just have to wait and see.