Today’s Rant: Should Teammates Fight Each Other 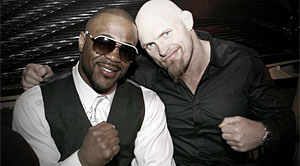 Rashad Evans made headlines while champion when he said he would not fight his teammate and friend Keith Jardine. Although, not many seemed to care as Jardine never got far enough in his UFC career to warrant a title shot, hence, a championship bout between the two fighters was never seriously discussed.

UFC fighters Josh Koscheck and Jon Fitch also stated they would never fight each other. Kos even went as far as to say he would “cut his leg off and move down a weight class” rather than fight Fitch.

Even more people began talking about friends and teammates fighting each other when Jon Jones won the light heavy-weight title and said during an interview that he would fight whoever Dana White told him to because that was his job. Teammate Rashad Evans took that as a slap in the face, and left Greg Jackson’s camp not long after. Evans has since taken to Twitter to engage in a battle of insults with his former teammate, a battle that is usually reserved for a playground.

The problem with teammates choosing not to fight each other is that it takes away from the fans and leaves the organization with one less high-calibre fight to put out. In the case of Bones Jones and Evans, two of the very best fighters in the Light Heavyweight division would potentially not have squared off. By choosing not to fight a teammate, the fighter is limiting his value to the company, and limiting his value to himself by placing further restrictions on how he will earn money.

There are three ways to look at a fighter’s choice to fight or not to fight a teammate. There is the perspective of the fans, the organizations perspective, and the fighter’s perspective.

From a fans view the idea of a good fight not happening because the fighters are friends is a hard pill to swallow. Fans want to watch the best possible fights, and as a fan I can tell you that I really don’t care if the men in the ring like each other or not. If the best matchup for the light-heavyweight belt is indeed Evans versus Jones, then as a fan I want to watch that fight especially when my hard earned money is going towards the purchase of this fight (whether watching live or on TV).

It is the perspective of the fighters that makes the idea interesting. Fighters have said they do not want to fight teammates because they need to have complete trust in one another while training. If a fighter feels he may eventually be meeting his teammate inside the Octagon, they may naturally be more inclined to hide weaknesses during training. Teammates also have a better chance of finding each other’s weaknesses, which could then be exposed in the Octagon when the two meet. Fighters have also mentioned how it would be harder to get in the Octagon and try to hurt someone they consider to be a good friend. But by choosing not to fight someone, a fighter may also be taking money away from his own family. If a fighter is friends with a title holder, and instead of fighting for the belt chooses to take another fight because he does not want to fight a teammate, he will not be making as much money as he could in a title fight. When the average career of a fighter is only a few years that money could be very important to the fighter, and to his family.

In my opinion the best fighters have to fight the best fighters. They owe it to the fans, which ultimately pay for the luxurious lifestyle that the best fighters enjoy. The fans also pay for the middle class lifestyle that lesser fighters enjoy. While they may not be rich, they are still getting paid to do what they love and are making a living without having to get a job that they are not as passionate about. It will always be hard for a fighter to train with someone that they may eventually meet inside the Octagon, but most fighters evolve quickly these days and train not just for fights anymore, but for the actual person that they are going to fight. The chance to spar or roll with someone in the past does not mean you will know any special knowledge that will give you the upper hand, because each fighter will have the same opportunity to gain inner knowledge of their opponent.