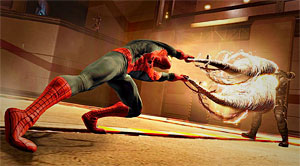 A few days ago, Activision with Marvel Entertainment announced Spider-Man: Edge of Time, and now Yell! Magazine has a few new screenshots to accompany the news. The new Spidey game is being developed by Beenox, who also worked on Shattered Dimensions, which is considered the best Spider-Man game to this day.

If you haven’t read the longer news bit, here is a simple little summary on what Spider-Man: Edge of Time is about. In this new game, Spider-Man will be challenged to save himself, and be forced to correct a timestream gone wrong. The player will be able to play as the Amazing Spider-Man in a contemporary environment, and play as Miguel O’Hara (known as Spider-Man 2099) who is set in a corrupted future. Time is against you, and the fate of Peter Parker hangs in between the actions of the two.

Browse through the screenshots above, and feel free to let us know your thoughts about Spider-Man: Edge of Time. The game will be available this fall on the PlayStation 3, and Xbox 360.