Watch Tom Holland Get All Spidey-Like 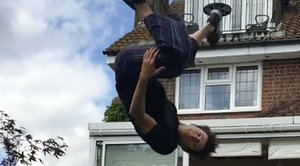 Well, Yellers, Sony Pictures and Marvel Studios have announced that Tom Holland (The Impossible, In the Heart of the Sea) will be the next Peter Parker under the direction of Jon Watts (Cop Car) in the upcoming Spider-Man flick. The 19-year-old actor beat out the likes of Asa Butterfield (Ender’s Game) and Charlie Plummer (Boardwalk Empire) for the role, which Holland will debut in the upcoming Captain America: Civil War in May 2016.

I guess as a form of celebration, Holland took to Instagram to post a few videos in which he shows off his acrobatic skills. Have a look below. I just wonder how thrilled the producers are with his stunts.

The upcoming Spider-Man movie is expected to hit theaters on July 28, 2017.