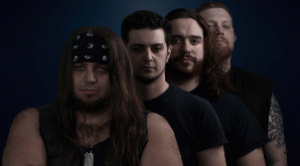 Thick and earth pounding, the way heavy metal should be, these guys have a sound that’s blistering and replete with soaring dual guitar solos, war-cry vocals, and a back beat that breaks sound bearers.

Rising from Montreal, Quebec’s metal hotbed and being voted the second heaviest local act in the Mirror’s (it’s a local weekly rag) “Best of Montreal Readers Poll 2010,” The Catalyst are ready to deliver their ultimate display of high-energy aggression with the release of their debut full-length album, Origins.

Taking over their old stomping ground, Foufounes Electroniques, on April 8, 2011, The Catalyst will officially launch Origins.

“This release has been nearly two years in the making, so we promise the launch party will be the culmination of everything we’ve been doing,” says bassist Mike Marino.

Origins is the perfect display of the band’s unique brand of thrash that fuses elements of the genre’s founding fathers (Metallica, Megadeth) with those of current flag bearers (Fear Factory, Lamb of God), creating a thundering sonic cocktail of aggression. The album was produced by J-F Fortin (Neuraxis, Anonymous) and mastered by Alan Douches (Chimaira, Hatebreed) at West West Side Music, and really showcases The Catalyst’s never-say-die attitude.

“We are all really excited to finally be able to release our debut album with a launch show and after party at Foufounes,” says Marino. “All of the opening bands are fantastic and guaranteed to keep you moving all night, and we’ll even have a few surprises in store for the crowd!”

Origins track listing:
1. When The Sun Shall Rise
2. Provocation
3. The Day After
4. Devil In Disguise
5. The Burning
6. Anthem For The Fallen
7. Collapse Of Reason
8. Forsaken
9. Call From Within
10. These Last Days

We’ll keep you posted on what we here at Yell! Magazine think of the band and the new album.