The Vinyl Snobs: The Bane of a Modern Man’s Existence (Rant of the Day) 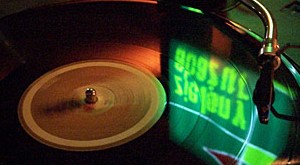 I was in a record store a while back looking over the inventory of vinyl they carried. You see, I was thinking of purchasing Love’s first two albums, which haven’t been released on CD as of the writing of this article. In fact, if I was able to find the albums (Da Capo and their self-titled first release), I was going to spend a decent amount of coin to purchase a turntable just to listen to them.

I fell in love with Love (a ’60s psychedelic band from California) back in 2001, when Rhino released a remastered version of the band’s third album, Forever Changes, on compact disc. The album is one of the greatest of all time comparing easily to the best of The Beatles and others like The Zombies or The Beach Boys without falling short. Because of this discovery, I have been waiting patiently for Rhino to reissue Love’s first two albums. It has been over six years now and no reissues are to be found, hence my search for the albums on vinyl.

Returning to my appearance in the record store, I spoke to the man behind the counter who was changing a record on the store’s turntable and asked if he had the albums in question. He pointed to the proper bin and I looked, but only found copies of Love’s work after Arthur Lee broke with the band and took the name with him. These albums were only Lee solo projects with Love’s name attached and, therefore, I wasn’t interested in them at the time.

I then made a comment about wishing the record companies would get off their asses and release the two albums on CD so I could listen to them without all the hassle of a record player. I stated in no unequivocal terms that I was only searching for the albums on vinyl because I was forced to. I said it was the only reason any sane person would put up with the older technology since the inferior first attempts at transfers from vinyl to compact disc were in the past (anyone buying the first generation of CDs back in the mid-’80s knows of what I speak).

The facial expression on the man behind the counter changed instantly. “What do you mean?” he asked with a sour look on his face. I answered, “What do you mean, what do I mean?” He went on to inform the ignorant masses of which I seem to be the leader of (since I was the only other person in the store) that digital music is the bane of any audiophile’s existence. Vinyl will always be the first choice of connoisseurs of music.

He continued, but I fell into a stupor as I do when people give me speeches lacking in anything reasonably logical. I imagined visiting his home and sitting in his living room. I pretended to look around and against the far wall I saw a black and white television without a remote; on the screen was a silent game of pong. Red and green milk crates filled with dusty, plastic-covered LPs occupied the floor. On the table to my right were a six pronged candlestick and a rotary telephone. At the desk to my right rested a typewriter of unknown vintage.