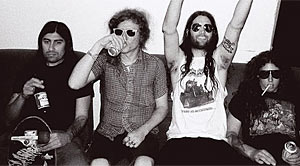 What is it about New York City? It just has countless masses of talent, but I guess that’s what you get from one of the world’s greatest cities.

Natur, a self-proclaimed “old Metal” band, formed in 2008 in Brooklyn, New York, and in 2012 released their first full-length album, Head of Death. Their self-categorization couldn’t be more correct. If you’re an old-school Metal fan, appreciating the likes of Black Sabbath, early Metallica, Darkthrone, Diamond Head, and more, then you’re gonna love these guys.

Speaking of these guys, they go by the monikers Sound Mound (bass), Tooth Log (drums), Dino Destroyer (guitar), and Weibust (vocals, guitar). Despite their playful names, these guys are serious about their craft, and you need to check them out.

If you’re already a fan, then you may have heard that as a result of fan demand Natur are offering a one-off vinyl pressing of Head of Death, and they’re only offering 1,000 copies. But this wouldn’t really be news worthy if it were just a regular old vinyl. Making it extra special is the pop-up gatefold sleeve that gives the impression of the band rising from the grave. Also, the vinyl pressing of Head of Death will be available in four colors:

This killer creation is sure to be sought after by fans and collectors alike, and once they’re gone, they’re gone! So order your copy now from the Earache Webstore while stocks last: