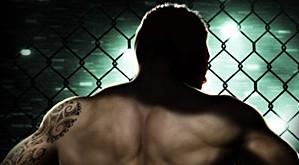 EA Sports MMA for iPhone/iPad was released on October 20th in Apple’s App Store for 4.99$. I managed to get my hands on a copy and, well, here’s what I think about it.

Right off the bat, I can tell you that this is the only MMA fighting game currently in the App Store and in that regard it is way ahead of the competition (which is no one at this point). With that being said, the game does have a few issues when it comes to playability, but overall, it is a pretty fun and unique experience.

For starters, the minute you start playing the game you are immediately thrown into a tutorial that teaches you all the essentials of gameplay, which is a pretty good thing since most people would probably get right into the action. The tutorial covers Standing, Clinch and Ground, giving you a step by step lesson in the controls of the game and the many different ways to use them. The only problem with the gameplay lies in the movement, which requires you to tilt the iPhone left or right to move ahead or step backwards and a quick tilt towards or against your body to side step. It’s pretty tedious, but if you don’t mind it than plus one for you.

As for the features the game has 3 modes that’ll easily keep you busy for a while. You have the options to play in Exhitibition, Career or Challenge mode. Exhibition allows you to play a quick fight using any one of the 24 available fighters (all real MMA fighters by the way). Not to mention the option to choose the location (USA x2, London, Brazil and Japan) of the fight along with the ring type (hexagon, squared ring or circular cage) as well.

If Exhibition mode doesn’t do it for you then you can tackle the challenging, umm, Challenge mode. Challenge mode has 25 specific scenarios for you to play where you have to defeat your opponent with a designated fighter or special condition of sorts. For example, one challenge requires you to fight Brett Rogers using Fedor and to beat Rogers by KO in the 2nd round, which for someone like me proved difficult as I was quick to finish most fights in the first round.

After you’ve given up on attempting beating Mayhem Miller by decision using Jake Shields you can move on to Career mode. Career mode immediately puts you into create a fighter mode, where you can create your own custom fighter (name, looks, tattoos, gear and attitude) and choose one of three weight classes (Lightweight, Middleweight, Heavyweight) and 8 fighting styles (Jiu Jitsu, Muay Thai, Wrestling, Kickboxing, Judo, Boxing, Sambo, and Sanshou) each with their own pros and cons. As you progress through your career you get skill points after each fight and the option of training before each fight. Each training scenario is unique in that it uses the iPhone’s touch screen in different ways.

Aside from the movement of the fighters the game is pretty fun, sure the graphics are a bit choppy at times, but this is an iPhone game, and well, you shouldn’t buy into that too much. The game also features a pretty solid soundtrack that ranges from heavy metal to hip hop. The commentating also makes a decent attempt to keep players entertained. Another added bonus for anyone on an iPhone 4 or the latest iPod Touch is the cleaner graphics that the retina display adds which gives it a bit more visual clarity and a bit more realism (not taking anything away from people using older versions of iPhone or iPod, the game still plays rather well).

All in all, the game is not a bad purchase coming in at 4.99$ and will provide you with hours of fun when you need to kill a little time. If you still need more convincing then check out the video below of the game in action (with a real person playing it).