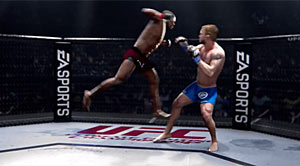 Remember way back in 2009, there was an MMA video game war between UFC President Dana White and EA Sports in regard that one day the best sports video game publisher/developer would pick up the publishing rights to the UFC. EA Sports confirmed back then that they wanted nothing to do with the UFC saying, “You’re not a real sport. We wouldn’t touch this thing. We want nothing to do with this.” Those are words the company would regret a few years later.

After the UFC partnered up with THQ to bring the first official game of a series to come, it was clear EA Sports wanted in and created a knock-off that featured former Pride champion Fedor Emelianenko on the cover of the game. Although, that game still had critical success and with THQ bankrupt, it took four years for the UFC and EA Sports to finally team up to create an official game that all MMA fans could truly appreciate.

We got a first glimpse of the combat game not too long ago in a trailer that showcased a number of sport games that will be using the new Ignite engine by EA, including EA Sports UFC.

Now, we have the first standalone teaser trailer for the game, and you can take a look at it right above. EA Sports UFC will be unveiled during E3 2013 later today.