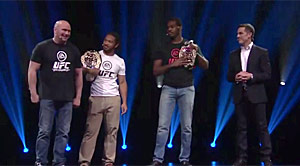 EA Sports promised to reveal the new UFC game at E3 yesterday, and they did. However, I feel a little raped because it’s just an extension of the teaser trailer. Well, in all fairness, absolutely nothing new in here expect a small change that bugs me now. They completely fucked up the “Showtime Kick” by Anthony Pettis this time. He misses UFC Lightweight Champion Benson Henderson by a few inches in the trailer. What the fuck? I guess maybe Henderson wasn’t happy they showed his face deform in the debut trailer released previously.