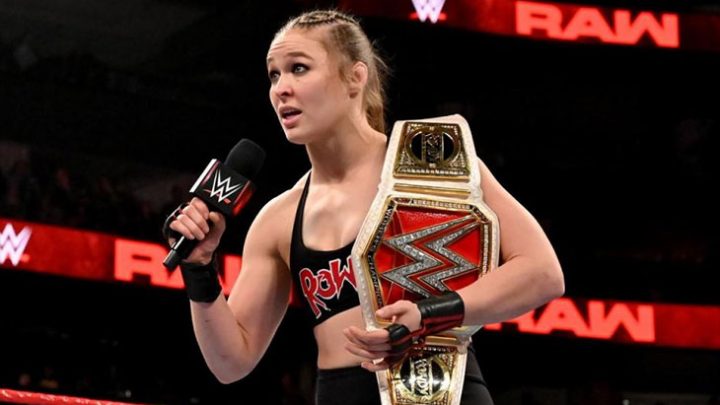 It’s been a while since we posted about Ronda Rousey and that’s just because she’s not doing any MMA these days. But when she starts to stir shit in the wrestling world, then I’m all ears and eyes.

Rousey, the current Raw Women’s Champion in her first reign has been building toward a triple threat match for the Raw women’s title between Charlotte Flair and Becky Lynch, which will likely be the main event of WrestleMania on April 7 at MetLife Stadium in New Jersey. If confirmed, this would very well be the first ever women’s main event at a WrestleMania.

However, before the historical event, Rousey broke the cardinal rule of professional wrestling, releasing a video where she angrily said that wrestling is “scripted” and she wasn’t playing by those rules anymore. In addition, she claims she could legitimately beat up every woman in the company.

It wasn’t a promo they gave me other things to say I didn’t f*cking say it,” Rousey said. “It’s not a promo. It’s not an act. I’m not going out there and doing their f*cking act anymore. They can say it’s part of the act to try and save face but it’s not an act. I’m going out there and doing whatever the hell I want and they can explain it however they want, but f*ck ‘em. Everybody. WWE Universe included. I meant that I’m going to disrespect the sport that they all love so much. ‘Oh don’t break kayfabe, Ronda!’ Wrestling is scripted. It’s made up. It’s not real. None of those b*tches can f*cking touch me. The end.

While this could be part of the storyline the WWE is trying to build, Rousey is drawing lots of attention again to herself and wrestling. I’ll be tunning in on April 7. Will you?

Stay tuned to Yell! Magazine for much more daily news.