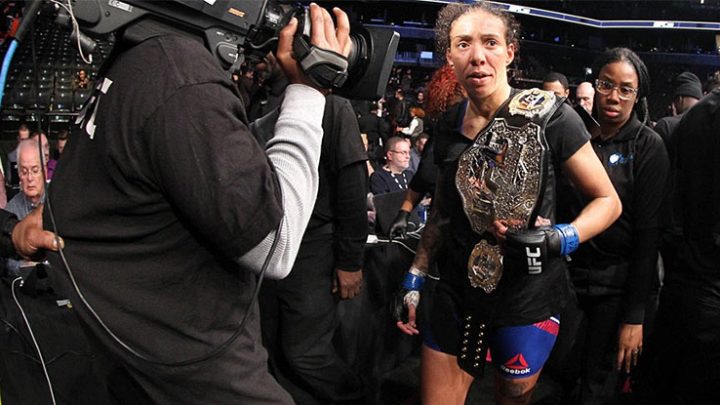 Germaine de Randamie won’t have a chance to defend the UFC featherweight title after all. Following an attempt to refuse a match with Cris Cyborg, the UFC has decided to put matters into their own hands.

48 hours after MMAfighting.com reported that Cyborg will face Invicta FC champion Megan Anderson for the UFC belt, the promotion officially stripped de Randamie of the belt.

The UFC announced on Monday,

UFC maintains that any champion is expected to accept fights against the top contenders in their respective weight classes in order to maintain the integrity of the sport.

MMAfighting.com followed up with de Randamie to get her side of the story and apparently the former champion had no idea she was being stripped.

I had absolutely no idea that I was being stripped of the belt, I found out through social media. Cyborg (Justino) is going to fight Megan (Anderson) for the belt.

Nobody ever told me anything about it.

UFC 214 will main event a title fight between Daniel Cormier and Jon Jones. The co-main will feature Cyborg vs. Anderson.

Stay tuned to Yell! Magazine for much more daily news.