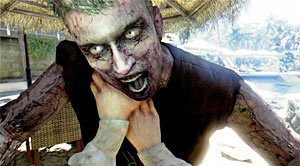 A good way to guide your Friday in the right direction and to set your mood positive for the weekend is to indulge yourself in tropical fear with brand new screenshots from the remastered version of Dead Island and Dead Island: Riptide.

As many of you should be aware by now, Deep Silver is releasing Dead Island Definitive Collection for next-gen consoles such as Xbox One and PlayStation 4. The collection will include both titles mentioned above, including Dead Island Retro Revenge. Fans of this hit zombie game franchise should expect a substantial visual and performance overhaul, the Dead Island Definitive Collection introduces many cutting edge current-generation graphical effects, which are teased in the screenshots.

This collection of screenshots shows off a mixture of iconic and gory gameplay as well as the beautiful scenery of Banoi from Dead Island. The images demonstrate the new high quality through the rebuilding of both Dead Island and Dead Island Riptide on Techland’s next gen engine.