Return Of The Trilogy, Playing On A Big Screen Near You 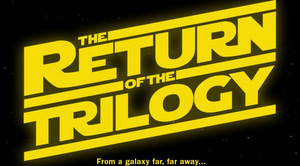 Spring has only just begun for many of us, and now we already can’t wait for August to roll around. Why? Because Alamo Drafthouse is bringing the original Star Wars trilogy to the big screen in various cities across the country, that’s why! The triple bill is being dubbed, Return of the Trilogy and tix go on sale tickets on sale May 4th. Visit ReturnOfTheTrilogy.com for more information and to buy your tickets.

Episode IV – A New Hope, Episode V – The Empire Strikes Back, and Episode VI – Return of the Jedi have long been out of release, locked up tight in the vaults. Now, an ultra rare opportunity will bring these beloved original classics of the Star Wars universe roaring across the big screen at movie palaces and performing arts venues from coast to coast.

Not only that, most will screen back-to-back-to-back as one galactic-sized triple feature – taking audiences from Luke’s humble beginnings on Tattooine all the way through to the final climactic battle between the Rebel Alliance and the Galactic Empire in a single sitting. The Force, as they say, will be strong with us.

It’s always been a dream to show the original Star Wars trilogy again — somehow, someway. Seeing the original trilogy on the big screen for the first time is a real life-altering event and just a supreme amount of fun. When the films became available to book for screenings like these, we jumped at the chance to do something big.

While many dates and locations are still to be announced, Return of the Trilogy screenings will take place at venues in over 20 cities throughout the month of August. All three films will be presented in their 1997 re-release format.

More than just an epic triple-feature, each Return of the Trilogy show will be in its own unique celebratory event, featuring specially curated video content before and between films, contests, props to bring the power of the Force to life, and other special surprises. And coming dressed as your favorite Jedi, scoundrel pilot, or rebel scum will be very much encouraged.

Rerturn of the Trilogy Roadshow: