Scythia Are Marching With “Soldier’s Lament” 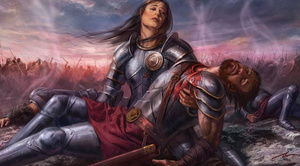 Vancouver, Canada-based folk-ish progressive heavy metal band, Scythia, is a band that will sneak up on you if you’re not looking. The band is having a quiet rise in the scene and on May 4th they will release their fourth independent release, Lineage. From that album, the band today has released the first single, “Soldier’s Lament,” which you can hear in the player above. If, upon listening to the song, you don’t feel like donning some armor and marching into battle, then there’s something wrong with you.

Lineage can be pre-ordered now via the band’s Bandcamp page.