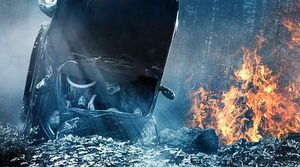 For those who haven’t seen the film how would you describe it?
Blood Rush is a psychological thriller about Nicole Diamond, an internationally ­known model, who finds herself in an upside­down car in the middle of nowhere. In the passenger seat is her unconscious boyfriend, pop singer Scott Donnoly, aka, Scotty Dee. Not a soul is around to help, and her legs are wedged under the dashboard. She’s trapped. Danger lurks everywhere, including a small fire under the car, wild animals in the vicinity, and the unknown, life­-threatening physiological effects of hanging upside down indefinitely. With her damaged cell phone, she dials random numbers until she finally reaches someone willing to help – a mysterious man named Casey. However, she soon learns that roadside assistance is the last thing on Casey’s mind.

I co­-wrote the script with my long­time friend and prolific screenwriter, Rob Greenberg, and I think anyone who’s seen this movie would agree: This isn’t your typical horror movie. Of paramount importance to me and Rob was substance, which led us to add the psychological element. At the time, there was a flurry of headlines about domestic abuse involving celebrities. There haven’t been many recent movies that touched on the important topic of domestic abuse, and we felt it deserved a deeper dive. We were aiming for suspense, so the story needed scary, interesting, and unexpected twists to satisfy today’s savvy audiences. At the same time, we wanted to avoid anything gratuitous; everything stemmed organically from the main plotline.

How long ago did you shoot the movie? Does it feel like a long time coming?
Production wrapped in 2014, but as any first ­time filmmaker knows, making a movie is like going to war… Every day is a new battle, and despite your best laid plans, you’re going to take some unexpected hits. In the case of Blood Rush, we had the typical time crunches, torrential rains during outside shots, and budget stresses, but what was atypical was the challenge of having our actors hanging upside­down, literally, for the majority of the shoot. In addition, the initial ending didn’t work when we screened it, so that had to be rewritten and reshot. This movie was difficult to make on all fronts, so, yes, it’s been a long time coming!

And the lead character is…
For the lead, I was seeking a highly ­talented actress who hadn’t yet broken out. We held closed auditions, and as luck would have it, I was hit with a cold (while in Los Angeles, of all places!) in the middle of our sessions. I was zoning out on cold medicine, and then Stella Maeve was up. I’d seen her in The Runaways, and I remember being impressed by not only her performance in that movie, but by the fact that she actually played the drums (and she had good chops, too!). When she started, I was immediately yanked out of my trance. She floored me, and I knew in an instant that I’d found my lead. When I explained the enormous challenges involved in this role to her, her response was, “Let’s do it!” We’re both from the New York area, and I felt an immediate kindred connection. I recognized her ambition and hunger, and she trusted me to push her, to get the best I could out of her, which I’ll forever appreciate. She was great to work with, and wow, what a performance she gave! I’m so happy to see her achieving greater and greater success.

Know anybody this has actually happened to?
Unfortunately… I know of at least one person who’d been in a car wreck where the car flipped. And I have a number of friends who’ve been victims of domestic abuse. So, the story is a concatenation of experiences from some of my friends, as well as actual news stories.

Research is usually required for any script, and my focus was mainly on the physiological effects of being upside­down, as well as domestic abuse. It was fascinating to discover that despite scouring the web and querying my doctor friends, no one seems to know how long a person could hang upside­down before it would become life threatening. The advice I was given was that a half­ hour should be okay, unless the actors became dizzy, in which case they should be pulled out. The domestic abuse research was heavier, and upsetting. There’s a general pattern with abusers and victims, though every instance is unique. We incorporated some of the commonalities into the story line, and I hope it raises awareness.

Whose car did you shoot it in?
We found the car in a junk yard. Its engine had seized, apparently pretty early in its life, hence its good condition. It took three separate tow trucks working in unison to get the car placed properly in the ditch at our main shoot location, and hidden cables secured it. For the driving scenes, we rented a “picture car,” meaning a functioning, matching car. And nowadays, while many movies use green screen for shooting driving scenes, I wanted to be as authentic as possible, so we used what’s called a “process trailer,” which is where the picture car sits atop a platform that’s towed by a special kind of truck. The platform is low to the ground to give a realistic perspective, as if the car’s actually driving. Cameras and lights can be placed on the process trailer, the towing vehicle, or both.

How did Stella do being hung upside down like that for so long?
Stella was a warrior. If this wasn’t the toughest role she’s ever taken on, it had to be right up there. And I doubt there are many actors in the world who’d be up for such a role or who could even pull it off. And if you think hanging upside down for long stretches is difficult, add to that literally freezing temperatures, wolves up in your face, snakes crawling all over you, and then all the actor stuff, like memorizing and delivering lines, and all the blocking. Stella’s incredible performance under all of those incredibly difficult circumstances speaks volumes to the enormity of her talent.

But we can’t forget Evan Taubenfeld, who played Scotty Dee, Nicole’s boyfriend. He too, was hanging upside down, and for the scenes where his character was unconscious, Evan had to return to the same exact position and remain completely still, which is actually extremely difficult.

The two of them were great to work with and they’ll forever be my heroes.

How did you go about getting distribution – did it get a festival run first?
We entered a couple festivals, targeting only the biggest ones, and they passed, which may have been because this movie is quasi-­experimental in nature. It’s also sort of cross-­genre, making it difficult to put in a box. At the same time, with technology and the lower cost of making a film nowadays, more movies are being made, meaning there’s more competition, (certainly when it comes to festivals), and there are some extremely talented filmmakers out there, too. But I quickly realized we didn’t need to go the festival route, because the whole purpose of that was to acquire distribution, anyway. So, we simply went directly to distributors, and then it was a matter of picking out the one we felt was the best fit.

What made Osiris Entertainment the right home for the movie?
Osiris really understood the movie, and that meant a lot to me, and we were on the same page in terms of the best roadmap. And now that our deal is underway, I have to say I’m very happy with the decision, as they’ve been tremendously supportive. Of course I want the movie to be successful, but I hope their decision proves to be fruitful for them as well.