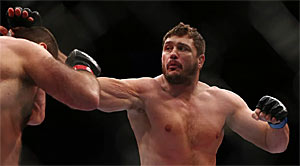 Matt Mitrione is done with the UFC, and is now moving on to a greener path with Bellator MMA. On Monday, Mitrione announced on The MMA Hour with Ariel Helwani that he has inked a lucrative contract with Bellator MMA, which grants him four-fights in the organization and every fight is a guaranteed six-figure purse.

It’s a new contract that Mitrione said is “double” from what the UFC offered him as show and win money.

In addition, Mitrione also sealed a gig as the new color commentator for Bellator Kickboxing. He’ll be making his debut on the inaugural show on April 16, 2016.

This is something I’ve wanted to do all my life.