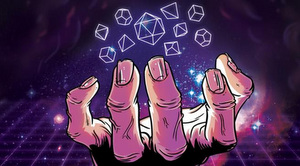 Here’s a prime example of the old expression that “you can’t judge a book by its cover.” But really, what should one expect with a track titled “Demons” and an album cover that looks like it belongs to an early ’80s sci-fi flick? Certainly nothing like the classic rock/NWOBHM-esque, acoustic-based, fantasy-laden goodness contained within Gygax‘ debut album, Critical Hits. Ok, you might have caught the fantasy element if you saw the D&D dice on the cover. And you certainly wouldn’t have figured these guys for taking music seriously.

Head on over to newnoisemagazine.com to hear the stream of “Demons” and let us know what you think.

Gygax is the new act formed from the ashes of Gypsyhawk, and Critical Hits will see release on January 22nd, via Creator-Destructor Records, on 12″ LP pressed on 180-gram colored vinyl, and on all digital platforms. Pre-orders for the wax and merch are available here.

About Gygax:
Gygax is a no-frills, classic rock/heavy metal hybrid, heavily steeped in the imagery of fantasy literature and role playing games, and rooted in the musical stylings of metallic ’70s rockers Thin Lizzy and Deep Purple, with equal parts metal and boogie-inducing groove. Though their name is attributed to the creator of Dungeons & Dragons, the band has described themselves more simply as “a beacon and an anthem for anyone who’s interests lie in creativity and the powers of imagination.”

Hailing from Ventura, California, Gygax was born out of the ashes of vocalist/bassist Eric Harris’ previous heavy-metal brainchild, Gypsyhawk. Bryant Throckmorton, who played second guitar in Gypsyhawk also joins Harris in Gygax on guitar. When Gypsyhawk decided to disband, Harris and Throckmorton took some time alongside friend and fellow guitarist Armand John Lizzy to begin demoing new material, then solidifying their lineup with Justin Dempsey on drums. The band’s Critical Hits debut boasts nine feverishly triumphant burners backed by huge solos and even more massive choral melodies that come alive with a fuzzed-out and hazy attitude but immortalized with crystal clear production values. It’s an LP that could accidentally get sucked into your ragin’ uncle Bob’s dust-encrusted classic rock platters and your older brother’s equally grimy classic metal/early doom collection and blend right into either.