Horror Games Could Lead The Way In VR 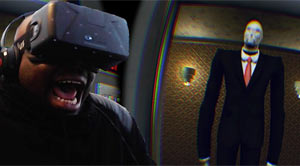 Like it or not, virtual reality (VR) gaming is on the way. This holiday season may be about the latest Xbox One and PS4 bundles, but don’t be surprised if in another year the hottest gift out there for gamers—or possibly just in general—is a VR gaming headset. The technology is there, and a number of companies including Microsoft and Sony have VR consoles more or less ready to be rolled out. The biggest remaining question is what sort of games we’ll be playing once these consoles become available to the mass market.

That doesn’t mean we don’t know some titles and examples already. There are a number of VR games that have been announced and/or demo’d already, so to an extent we know what to expect when VR consoles first hit the shelves. But in a broader sense we can’t be entirely sure what types or genres of games will come to best represent this innovative new form of home gaming. I have a hunch, however, that horror is going to lead the way.

For starters, I’d argue that horror in gaming is more prevalent already than a lot of people would give it credit for. And in fact, it’s been proven time and time again on the latest consoles that players are fascinated when presented with detailed, realistically rendered scare scenarios. The most recent example is Fallout 4, arguably the most talked about game release of 2015 that contains several terrifying storylines. The game also has a touch of humor, but it’s never been lost on the developers of the Fallout series that horror is appreciated. Other titles that come to mind just from the last few years include Dying Light, The Evil Within, Resident Evil: Revelations 2, and even Alien: Isolation. All of these games are not only scary but reliant on strong atmospheres that could translate wonderfully to VR.

I’d also point out that this isn’t a recent phenomenon, nor one related only to modern consoles. In fact, games with scary themes exist in pretty much every area of gaming, including some places you might never expect to find it. The Internet gaming business in particular emphasizes the popularity of horror genres, because in that business, genre is about all there is to attract players who might not otherwise opt for casino games. At Gala Casino’s site, you’ll find some very modern gaming concepts such as the ability to play cards and other tabletop games with human dealers who influence the action through your computer screen. However, you’ll also find a wide variety of fictional themes including a Haunted House option, a creepy spin game called Medusa’s Gaze, and even some titles from Marvel’s spookier side, such as Daredevil and Ghost Rider. In other words, it’s an online casino at heart, but it nevertheless uses horror concepts to spark interest. Even on mobile devices, horror games have gained a very strong presence, and I’d actually argue that it’s this branch of gaming in particular that points to the potential of horror on VR. When you think about it, touchscreen gaming is actually a little bit closer to the VR concept in that more depends on the visuals than the controls. And this is part of what’s helped spooky games to thrive on mobile platforms. This list speaks to a lot of the different characteristics that make these games so popular, and it doesn’t even include popular frightening narrative games like Device 6, Year Walk, or even The Room. Some of these games even ask players to turn out the lights and wear headphones to play, which in effect is already simulating a VR-ish experience.

So really, it’s proven at every level that the horror genre still has a pretty massive following in gaming. But in ways it’s also already been proven that these games work well in creating experiences that are more about themes and visual immersion than action or movement. That should make them easy for VR developers to create, and should also makes these games among the ones that feel most natural for players.