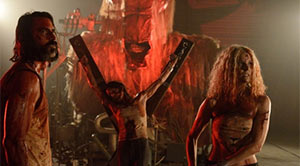 It appears like Rob Zombie’s new horror film, 31, is staggering in post-production hell because it recently failed two attempts through the Motion Picture Association of America (MPAA) for an R rating. This means Rob and his editor will need to make more cuts in the film to avoid the infamous NC-17 rating. Which also means a bit more delays, and that doesn’t make anyone happy one bit, including the director.

Well, after two tries through the MPAA our rating on 31 remains NC-17. Maybe three is the charm to get an R rating. Why R you ask? Well, because your local theater will not show an NC-17. Even though you are a fucking adult… things much be censored for your enjoyment.

Apparently, his Halloween-set horror film 31 is plagued with too much disturbing stuff to have it played at local theaters.

At this moment, who knows how much more stuff Rob will need to cut from the film for an R rating, but let’s just hope not too much cutting goes in to ruin his ultimate vision for 31. For those still unfamiliar with this film, 31 features a man-made Hell called the Murder World. It’s a place where five kidnapped people must fight against a gang of evil clowns for 12 hours in a game called 31.

The film is scheduled to premiere on January 23, 2016 at the Sundance Film Festival.