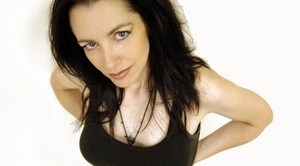 I’ve only been able to say this about a very select few people whom I’ve interviewed, and I’m so thrilled that I could deliver a bloodcurdling scream to say that horror icon, scream queen sensation, sexy vixen of blood and splatter, Debbie Rochon is as friendly and personable as a pastor on Sunday.

One of her most recent films is Clinger, written and directed by Michael Steves and starring Vincent Martella and Jennifer Laporte. The movie is a charming supernatural horror/comedy with an endearing love story that’s completely relatable to anyone who’s had an obsessive crush and/or love affair… or to anyone with stalker tendencies. Debbie’s role is small, but she still had lots of positive things to say about the movie.

In addition, we talked about horror in general, Wes Craven, her directorial debut (Model Hunger), Twisted Sister and Dee Snider (as well as the possibility of Strangeland II), and so much more.

You recently had a supporting role in Michael Steves’ Clinger, which is a supernatural horror/comedy; can you tell us about the film and your character?
I have not seen the movie yet! I can tell you about my character, for sure, but I have yet to see the movie, which I can’t wait to see. Obviously, the whole movie has a lot of comedy to it, the premise is very comedic. It’s very clever because it’s taking a notion and then going 1,000% with it; it’s taking an idea and following it through to infinity, as it were.

My character, I play the mother of the girl that the “Clinger” guy, who’s played by Vincent [Martella], is in love with. Me and my husband aren’t exactly run-of-the-mill, we’re a little bit loopy in our way, sorta come from a hippy background and try to make ourselves as normal as possible, but you know we can be at times stranger that our children. Our children are probably some what more normal than we are. And of course that makes us more pliable in a good way, we are willing to battle the unknown for our daughter. If we were from another generation or something maybe we we would not believe her, but luckily we dropped enough acid in our time that we go along with the whole thing and we’re down with it.

How did your involvement in the movie come about?
Mel House brought me. I didn’t know the players all that well, like Bubba [Fish] and of course Michael [Steves] and such, so Mel House is working with them, and I’ve done a couple movies with him, and he brought myself and Lisa Wilcox in to the movie, which was really awesome of him, and had a great time. Everybody that I came across is so perfect for their role. It was great fun. It’s not your first turn as a mother, but, in general, how do you feel about playing a mother?
Well it depends on what the character is like. It’s very hard for me to play something bland and uninteresting in what might be normal because I don’t really have any grounding for that, or any experience. It’s not that I have to have experience within something to play it, you know I don’t have to have been a serial killer to play one. I’m not really drawn to the normal. I like playing mothers a lot, it just depends if there is something to them: What are their flaws? What are their neurosis? So if they’re crazy, a fanatic, off-beat, or even a drunk, that’s far more interesting and fun for me than attempting to do something that’s kind of bland.